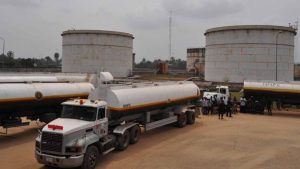 Independent Petroleum Marketers Association of Nigeria (IPMAN) has condemned the introduction of bulk purchase agreement renewal as one of the conditions for loading products at the Pipelines Products Marketing Company (PPMC) depots.

Debo Ahmed, the Chairman, IPMAN, Western Zone, made the observation in an interview with the News Agency of Nigeria (NAN) in Lagos on Saturday.

Ahmed said that some PPMC officials had instructed marketers loading products at depots to renew their bulk purchase agreement before loading.

According to him, such directive is adversely affecting marketers loading from the depots.

NNPC has been recording huge financial loss by pumping petroleum products through the System 2B Pipelines Network due to the activities of the vandals.

System 2B pipelines network is the pumping of petroleum products from Atlas Cove in Lagos Island to Ejigbo, through Mosinmi in Ogun to Ibadan to Ore in Ondo State and Ilorin in Kwara.

The corporation had in 2016 stopped pumping of products through the network, thereby making use of the private depots in Apapa to distribute its products.

“We appeal to government to reconsider the bulk purchase agreement renewal on marketers.

“The newly introduced bulk purchase agreement renewal by the government officials is a fraud.

“We are told that all marketers should come and renew its bulk purchase agreement for four years again after we have paid and signed during registration with the depots initially.

“This is against the bulk purchase agreement earlier signed with marketers; this has affected us adversely from the point of loading.

“We want to tell the government that what the officials are doing on the bulk purchase agreement is wrong.

“It’s another form of ripping the marketers. We are not sure the money is going to the Federal Government’s account,’’ he said.

Ahmed urged PPMC management to commence loading of products at the depots, saying it took over a week for the products to be stored at the depots.

“As we speak, we have about 60 million litres of petrol at Mosinmi Depot, while Ejigbo Satellite Depot has over 35 million litres.

“But other depots like Ore in Ondo, Ibadan, and Ilorin have not received products.

“We have not commenced loading at Mosinmi and Ejigbo satellite depots; we are told that the loading would commence soonest but it has not started.

A marketer told NAN on a condition of anonymity that one of the reasons why loading was delayed at PPMC depots was the connivance between the corporation officials and the private depots.

According to the marketer, such connivance will ensure that the private marketers sell their products on time.

A check by NAN at the depots indicated that business activities around Mosinmi and Ejigbo depots have started to pick up after 11-months of non-availability of products for loading by marketers.

Alhaji Dele Tajudeen, the immediate past Chairman, IPMAN, Mosinmi Depot, said that the place had been the central point for all marketers in the western zone.

He said that for over 11 months, the marketers could not load products from the depot.

According to him, Mosinmi depot has turned to a graveyard.

“No business activities are going on there; marketers have suffered greatly due to non-availability of products.

“The shutdown of pumping of products to Mosinmi has affected our business including that of the petty traders within the premises.

Tajudeen, however, commended the management of NNPC for finding a lasting solution to the damaged pipeline.

Mrs Alice Bakare, a food seller, Ejigbo depot, commended government for resuming operation at the depot, adding that many petty traders had suffered due to the closure of the facility.

Mr Adamu Idris, a truck driver, expressed optimism of loading at the Mosinmi depot, saying he had been on the queue since Tuesday but loading had yet to begin.

However, an unnamed official of PPMC, Ejigbo, told NAN that they were still expecting a directive from Abuja to start loading.

The official declined comments on the bulk purchase agreement renewal.

“I cannot comment on that now, but that was the instruction,’’ he said.