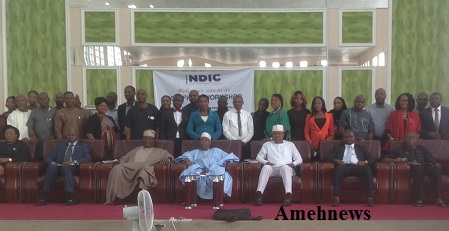 Data from unofficial, but credible sources put the estimated cost of the 2015 election in Nigeria at US$2 billion as traceable expenses spent on media advertisements, campaign materials among others. These expenditures did not include “underhand dealings and the use of state-owned facilities including stadia for campaigns and other political activities.”

Of the US$2 billion, an estimated US$547 million was spent by INEC and other institutions. These traceable expenditure costs represented about 0.42% of the 2015 GDP ($481.1 billion) and approximately 62% of the approved capital expenditure for the same year ($3.22 billion). Informed observers were convinced that the bulk of the resources expended on the election, even by political parties and by candidates originated from the public till.

INSULATING ERGP FROM THE POLITICAL STORM by Prof. Ode Ojowu, Economic Adviser to Daily Trust Newspapers, being paper presented at a Two-Day Annual Workshop for Business Editors and Members of Finance Correspondents Association of Nigeria (FICAN) Organized by the Nigeria Deposit Insurance Corporation (NDIC) said the ERGP, though recognizing the negative impact of the electoral campaign on the growth of the economy, does not include any strategy to mitigate its impact. In fact, the word election is mentioned only once in the ERGP document. While a decline of 0.3% of GDP is not by any measure slight, it is even more dangerous to assume automatic correction of the decline in growth immediately after the election year.

Ojowu pointed out that THE NIGERIA ECONOMIC RECOVERY AND GROWTH PLAN (ERGP) is a blueprint for recovery from recession in the short term and a strategy for sustainable growth and development in the medium term. The ERGP has three major objectives that will help achieve the vision of inclusive growth, namely;

Since the formal launch of the Nigerian Economic Recovery and Growth Plan (ERGP) at the State House Council Chamber in Abuja by President Muhammadu Buhari, witness by Chairman and NGF and Zamfara State Governor Alh Abdulaziz Yari and Rt Hon Yakubu Dogara during

Professor noted that the strategies designed under the ERGP are not just sector specific to accelerate growth restoration, they also promote cross-sectoral capacity building and critical infrastructural development. With a strategic balance of monetary and fiscal policies, internal consistency in inter-sectoral plans and external balances, prioritized sectoral funding, all against the background of over-arching political commitment, the ERGP expects to turn the Nigerian economy around, through economic diversification. The diversification in turn, will end the economy’s heavy dependence on the oil sector for both revenue and foreign exchange earnings.

“The ERGP projects a growth rate of GDP of 4.8% in 2018 and a downward review, or a “slight dip” to 4.5% in 2019 because of the national election of that year. This dip of 0.3% of GDP is expected to auto-correct with a projected growth of 7.0% to be achieved in 2020. The ERGP, though recognizing the negative impact of the electoral campaign on the growth of the economy, does not include any strategy to mitigate its impact.

According to Prof’ statement “in the face of these problems, the successes of the Buhari administration so far, appear dwarfed. It is against this background that when a few days ago, the leadership of the NDIC approached me to present a paper on the topic “ECONOMIC RECOVERY AND RECONSTRUCTION”, I requested to alter the topic to a narrower one on “INSULATING THE NIGERIA ECONOMIC RECOVERY AND GROWTH PLAN (ERGP) FROM THE POLITICAL STORM” to alert the administration and the people of Nigeria not to allow the struggling economy to suffer neglect in the build-up to and during the coming national elections. We cannot afford it this time around. The ERGP is the Government’s instrument for pulling the economy out of recession and into the path of sustainable growth, and so its implementation must be protected from the vicissitudes of partisan politics for the expected outcomes of the ERGP to be realized.

Though the ERGP does not define the inflexion point at which recovery turns to growth, a forced decline, or a dip of 6.25% of the growth rate from 4.8% to 4.5% can induce a growth rate reversal that is off the ERGP target.

Ojowu disclosed that the ERGP reviewed downward its growth target for 2017 from 2.19% to 1.5% due to current challenges in the economy. These challenges include delay in passage of the Budget, delay in funding of capital projects as well as the time lag between the release of funds and disbursement of same to contractors and other beneficiaries. The effects of these delays will have a spillover effect on subsequent years, he added.

He said while this last scenario strengthens the need for developing and implementing strategies for insulating the ERGP from electoral politics, the essential point being made is that there are numerous uncertainties around the ERGP growth trajectory that need to be watched from an ‘ERGP situation room’ , if the ERGP targets must be achieved

“The diversion of public funds, human resources, as well as orientation away from economic activities over an extended period, constitute an important reason why mechanisms should be put in place to insulate planned development programmes from the negative impact of electoral politics

“It is recommended that the Situation Room be composed of Ministries of Agriculture; Industry, Trade and Investment; Budget and National Planning; CBN; Finance; Power Works and Housing; representatives of the private sector, especially the contractors, with technical support from NBS and Development Partners.  They should be responsible for designing a mechanism for aggressive monitoring of the implementation of the ERGP priority projects, track capital releases to ensure early disbursement to contractors and other target beneficiaries. Under the current bureaucracy, it is a tedious exercise to get the disbursed funds to beneficiaries long after their release by the Ministry of Finance. Under the TSA both CBN and Ministry of have critical roles to play in capital funds disbursement. Timelines for the disbursement of capital releases should be defined for relevant officers in the MDAs and such information be made public. A Contractors’ complaints desk should be set up in the Situation Room to deal especially with delayed fund disbursements.”

Professor Ojowu said in ERGP document it was recommended that special emphasis be placed on complimentary and coordinated road construction by the three tiers of government that link urban-rural roads to promote scale movement of persons and goods between urban and rural areas. Roads are of particular importance because of the immediacy of their impacts and their catalytic role in economic growth and promotion of trade and socialization. Recently the federal government’s investigation revealed that the cost of transport was a major cause of commodity inflation in Nigeria, he noted.

Atiku Abubakar returns to PDP, says APC has failed and continues to fail the people