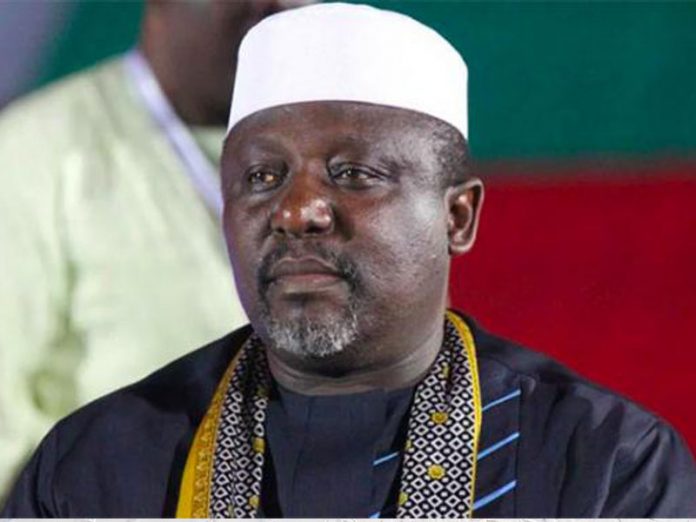 Former Governor of Imo State, Senator Rochas Okorocha, last night remained in the custody of the Economic and Financial Crimes Commission (EFCC) more than 24 hours after his arrest by the anti-graft agency.

Okorocha was picked up in Abuja on Tuesday by the commission in connection with an alleged diversion of N7billion while in office.

Spokesman of EFCC, Wilson Uwujaren, said the former governor was still undergoing interrogation at the agency as at last night.

“He is still with us,” he said in a phone chat.

THISDAY, however, gathered that the senator representing Imo West Senatorial District, was perfecting his bail conditions and would be expected to leave the agency between last night and early this morning.

“He is perfecting his bail conditions presently. He may leave tonight (yesterday) or tommorow morning (today)”, a source said.

Okorocha’s media aide, Mr. Sam Onwuemeodo, had in a statement, said Okorocha was cooperating with investigators as a law-abiding citizen.

“The commission is doing its job and should be given the needed cooperation and Okorocha being a law-abiding citizen, would always cooperate with the Commission over the matters in courts.

“EFCC is not a slaughter House, but a very responsible institution and should be seen as such,” he said.

The former governor has had a running battle with the Imo State Governor, Senator Hope Uzodimma, over ownership of some assets in Owerri, the state capital which the state government had sealed.

The former governor had gone to the property with his supporters to unseal it.

The situation had degenerated into the arrest of the former governor by the Imo State Police Command on
the orders of the state government.

Senator Okorocha was later released after the intervention of the presidency.