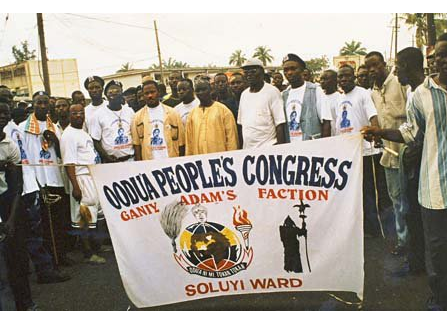 The group raised concerns over alleged influx of some strangers into the state.

A statement signed by Kunle Famuyiwa, leader of the groupn said his men would not watch the state being robbed by strangers.

The statement reads in full:

Following disturbing developments in our State as regards the forthcoming Ondo governorship election, we wish to state as follows:

That we have observed with great concern the unusual influx of strange persons especially of the northern extraction into Ondo State on the eve of the gubernatorial election.

We have also observed the needless invasion of our State by officials and men of APC-led federal government and we wonder what such people have come to do in this State even when they have no direct influence or bearing on the election.

Credible reports have also reached us that this unusual influx and invasion of our state by agents of the federal government and the All Progressives Congress (APC) is to execute a rigging plan that has been concluded in connivance with INEC and the security agencies.

Such agents who include the Minister of Mineral Resources, Dr Kayode Fayemi, Simon Lalung of Plateau State, Abdullahi Umar Ganduje of Kano State and their cohorts, who have no business in the state at this time, are given up until 6:00pm today to vacate the State after which their safety can no longer be guaranteed. We have restrained our people enough but the provocation by these elements is becoming too dangerous for us to stomach.

We are determined and no amount of security agencies can stop us. Enough is enough!

We hereby call on all Ondolites and friends of Ondo to be on the lookout for these elements and chase them away from the State at the expiration of the 6:00pm deadline. Anyone who takes our warning for granted does so at his or her own risk.

Based on the foregoing, we wish to state categorically clear that we will resist every form of rigging, inducement and or manipulation no matter how sophisticated or elaborate it might be.

Let us warn that the people of Ondo State are battle-ready to resist every form of intimidation and harassment from any quarters. Ondo and Edo may sound alike but we will not allow what “killed” our brothers in Edo to kill us in Ondo.

Anyone found to be involved in any way in any rigging plans should be ready to face the dire consequences of their actions. This is our State, and we are not ready to surrender it to retrogressive forces parading themselves as agents of change. Those who say we would not sleep in Ondo State must also be ready to either remain awake for a very long while or rest in peace. The choice is theirs.

Those who plunged Nigeria into unprecedented recession, executive brigandage, insecurity, famine, job losses, weakened currency etc should not expect us to surrender our State to them.

We hereby call on all Ondolites to be vigilant and rise to the occasion, vote and watch over their votes till the last stages.

They should also arm themselves with as many electronic devices like camcorders, phones, voice recorders and such other similar devices as possible to record events at their respective centres especially capturing on record those who are collaborating with perpetrators of rigging be it they security agents, INEC officials etc.

Finally, we are watching. To be forewarned is to be forearmed.”

Similarly, a former minister of aviation and chieftain of the Peoples Democratic Party, PDP, Femi Fani-Kayode has warned the Independent National Electoral Commission, INEC, against rigging the Saturday’s governorship election in the state.‎

Boy disfigured by chimps in Africa thrives after US surgery