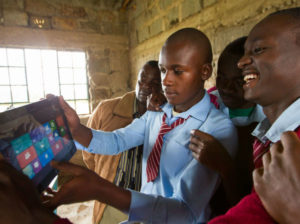 Orange and OpenClassrooms have announced a partnership that they will provide digital training in Africa. Orange subsidiaries in Africa are already working on the launch of training centres providing online courses via OpenClassrooms.

To rise to the challenge of the digital revolution in Africa, students and teachers alike need to be trained in the new technology. There are two objectives for countries in Africa: to use digital technology to boost growth, and to focus on new sectors of business that create jobs. In both cases, it is essential to train young Africans to ensure the economic development of the continent in the decades to come and avoid the brain drain of strategic skills for its development.

By 2050, the African population will double to reach 2.5 billion, half of whom will be under the age of 25, according to estimates by the UN. Investing in education, in particular, e-education, is an absolute priority to overcome the lack of physical and technical infrastructure.

To support Africa in this major project, Orange and OpenClassrooms have combined forces to form a broad-based partnership to train young Africans in digital technology.

The partnership between Orange and OpenClassrooms will be formed on two levels:

Digital training centres will be established based on the OpenClassrooms diploma with “Guaranteed employment” commitment, with the help of local partners, whose premises will be used as training and examination centres.

The courses are made up of series of texts, videos, and quizzes. The smartphone courses are easy to access, encourage the sharing of knowledge between students, and also user-friendly and optimised for data consumption.

“The digital revolution is an exceptional opportunity for Africa, both as an accelerator for development and for new sectors of activity where it can excel. Africa needs to train hundreds of thousands of young people in digital technology in order to seize this opportunity. Our partnership with OpenClassrooms once again illustrates Orange’s support in reaching the objective” explains Bruno Mettling, CEO of Orange Middle East and Africa.

“We are proud to contribute to the development of digital skills in Africa via this unique partnership with Orange. Backed by the quality of the Orange network in Africa, our educational expertise will boost development and the creation of jobs” adds Pierre Dubuc, CEO of OpenClassrooms.

After providing access in Africa to educational content via smartphone in association with the CNED the partnership illustrates a new stage in the “Orange Digital School” project targeting students, teachers, universities and schools.

The cooperation will rely on local Orange entities in Africa and the Middle East, in association with African partners such as the Virtual Universities and young African startups. Other agreements will follow with other institutions and partners in the field of education and online digital technical and professional training in French