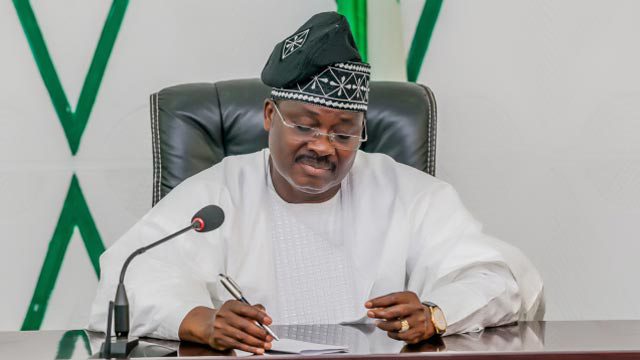 The Oyo State Government has embarked on an intensive training package for over 4,472 rural dwellers on rural financing through the State Rural Finance Institution-Building (RUFIN) in nine Local Government Areas in the state.

The State Government said that the two-day training is meant to support, empower and consolidate group cohesion dynamics as well as management of rural financing.

Speaking at the weekend during the flag-off of the training programme held at Ikoyile, Oriire Local Government Area of the state, the State Commissioner for Agriculture, Natural Resources and Rural Development, Prince Oyewole Oyewumi said that the training would enable the rural dwellers to become creditworthy groups, noting that after the training, they will be linked with financial institutions for loan accessibility by RUFIN.

Prince Oyewumi, who was represented by the Permanent Secretary in the Ministry, Mr. Victor Atilola, reiterated that the present administration in the state places priority on food security, poverty reduction among the people at the grassroots as well as job creation through its various agricultural policies and programmes which have enabled a favorable environment for investors.

He posited that RUFIN will not give loan facilities directly to the participants rather link them up with the financial institutions with lower interest rates after meeting the necessary requirements, stating that the Group Dynamics play a fundamental role in group functionality.

In his speech, the State RUFIN programme Coordinator, Comrade Olusola Ogundiran, said the participants were divided into groups to allow for monitoring and connections with financial institutions.

He noted that the programme was not focused on farmers alone but also rural dwellers to reduce poverty in rural areas, adding that the groups will be trained across 9 Local Governments including Ikoyi-Oriire, Ona-Ara, Oluyole, Ibarapa North, Iwerele in Iwajowa, Afijio, Jobele, Akinyele, Atisbo and Ibarapa East Local Government Areas.

In their separate remarks, the Caretaker Chairman, Oriire Local Government, Hon Odekanmi Oluyinka, who was represented by the Secretary of the Council, Prince Toyin Kolawole and the Head of Local Government Administration, Alh Bayo Raji, appreciated the government of Senator Abiola Ajimobi for encouraging farming as well as initiating programmes to better the lives of rural dwellers, saying these have reduced rural-urban migration.

Speaking on behalf of the participants, Mr Olusoji Adedokun, commended the State Government and promised that they will be creditworthy ambassadors.

CBN ever-ready to support any investment in Agriculture – Emefiele