Parents of participants at the 2017 Cowbell Football Academy (CFA), organised by Promasidor Nigeria Limited, have commended the company for sustaining the project, which helps to build children’s skills and motivates them towards the world’s most popular sport. 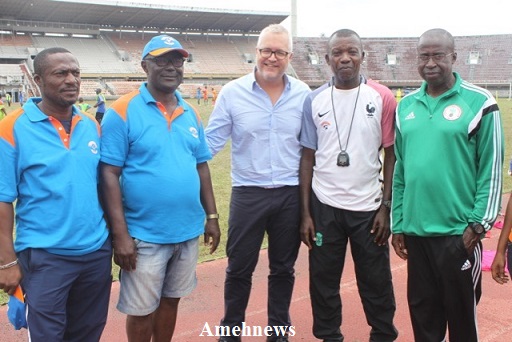 Cowbell Football Academy, which is open to children between the ages of five to 17, is in its fifth year. The 2017 Summer camp edition will run till Saturday, August 12 at the National Stadium, Surulere, Lagos.

Commenting on the initiative, Dada Ajai-Ikhile, an advertising practitioner whose child attends Grace High School, Gbagada, Lagos, said Promasidor has done well in ensuring that children learn the rudiments of football at an early age, which inspires their interest in the game. He said that CFA was sure to produce a pool of professional footballers that would make the country proud in future.

According to Ajai-Ikhile, the initiative is the most balanced approach to giving children an opportunity to express their passion for football. “It is balanced because the pressure is not too much on them to learn since it is held during the summer school holiday. The teachings at the academy together with the talent they already have and the knowledge from the school will help any of them to pursue a career in football,” he said.

Ajai-Ikhile disclosed that his son’s passion for the game has grown to the extent that he now wants to be a professional footballer. “I am deliberately guiding him through proper planning, and with the skills acquired at the academy, l believe he can realise his desire,” he said.

Obayemi Praise, whose children attend Ostria Private School and Deeper Life High School at the academy, said she was quite impressed with what Promasidor has done with the annual initiative, which has helped to build up children’s interest in football.

“The coaches are putting in their best to enhance the skills of the children and my sons are keen on becoming professional footballers in future, after attaining tertiary education,” she said.

This view was also shared by Chukwuka Udeh, who has his ward from Ireland, Umeh Kingsley, at the academy. He poured encomiums on Promasidor for providing the opportunity to improve the children’s skills and for designing a career path for them.

“The training is all-encompassing as it is on the fundamentals of the sport,” he said.

Former national football team stars, including Segun Odegbami, Mutiu Adepoju and Henry Nwosu as well as the coordinator of the programme, Godwin Dudu-Orumen took the children through the nitty-gritty of the game.

On the opening day of the camp, Odegbami motivated the children to develop interest and skills for football. He told them how he combined engineering studies with football successfully in his formative years.