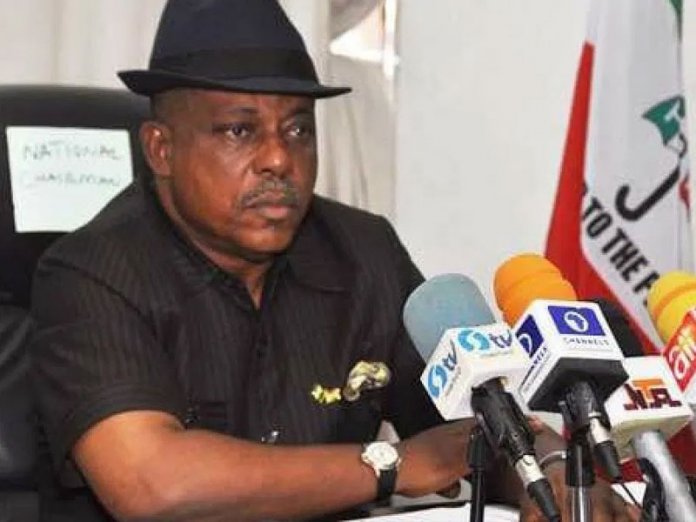 The National Chairman of the Peoples Democratic Party (PDP), Prince Uche Secondus, yesterday called on President Muhammadu Buhari to declare a state of emergency on the country’s security.

He also described the federal government’s handling of the #EndSARS protests as a threat to national unity and cohesion.
He related the shooting at the Lekki Tollgate in Lagos by soldiers to Tiananmen Square shooting in China in 1989.

Secondus appealed to the All Progressives Congress (APC) not to politicise the pains that Nigerians are passing through, saying that the killing of the #EndSARS protesters has nothing to do with politics.

The PDP chairman, in a press conference in Abuja, said, members of the armed forces meant to protect the people, have turned against the youths.

He said: “As the main opposition party, which has carefully watched this development, PDP views the dimension the federal government is directing the protest as unfortunate and dangerous to national cohesion and peace.

“As the needless bloodletting rages, our President, the Commander-in-Chief, Muhammadu Buhari, has continued to keep mum behaving exactly like Nero who played the fiddle while Rome was burning.
“The calls by reasonable heads in our land, including from the nation’s Senate, for the president to respond appropriately has fallen on deaf ears.

“This is not time to play politics. No one plays politics with insecurities as one does not know who it will consume. PDP secretariat in Ondo was consumed. This is not time to play politics
“When you kill your youths, the leaders of tomorrow, who will take over tomorrow?”
He said the PDP found the glaring snobbish silence of the president and the injection of violence into the peaceful protest unacceptable, contending that it paved the way for the deployment of the military to murder innocent harmless Nigeria youths.

“PDP stands shoulder-to-shoulder with all the victims of this brutal attitude and condemns in the strongest term, the mindless and the inhuman shooting of citizens, an action that runs afoul of every national and international laws. We also urge the protesting youths to ensure that they continue to be peaceful even in the face of provocations,” he stated.

He lamented that the government that should be concerned about national security was allegedly encouraging violence by deploying troops against protesting citizens.

“We, therefore, wish to state unequivocally that the president has an honourable option in the face of the glaring incompetence in governance to declare a national emergency in the nation’s security architecture.

“We also request for the immediate setting up of an independent judicial panel to look into the handling of this peaceful protest especially as it relates the role of security agencies,” he said.