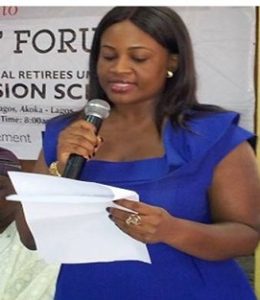 The Federal Government has said it plans in 2017 to float a micro pension scheme for artisans, mechanics, tailors, traders, hair dressers and other self-employed persons in the informal sector of the economy. While the Contributory Pension Scheme (CPS) introduced under the Pension Reform Act 2014 is working fairly well, it does not capture millions of workers in the informal sector. The same Act established the legal framework for micro pension. Section 2(3) of the Act 2014 extends coverage of CPS to self-employed persons. Government says the pilot phase of the micro pension scheme is expected to kick off by the second quarter of next year through the National Pension Commission, PenCom.

Head of PenCom’s Micro Pensions Department Polycarp Anyanwu said in Calabar that micro pension is an initiative that exists for the provision of pension coverage to self-employed individuals. He said the scheme is an offshoot of the pension industry’s five-year strategic plan to expand CPS coverage to 20 million contributors by 2019. The scheme’s pilot phase would be targeting 250,000 enrolments within six months, he said.

According to PenCom, pension managers have 7.24 million contributors in their network as at September under the formal CPS. The figure represents about 7.7 per cent of labour force and four per cent of contributors in private and public sectors. National Bureau of Statistics [NBS] states that 37.6 million (representing 40.1 per cent) of Nigeria’s 93.5 million adult population operate within the informal sector of the economy.

The informal sector is therefore a critical part of the economy. The scheme engages and extends pension to the larger segment of the working population, to ensure that workers outside the formal sector have something to fall back on when they grow old and retire from active service.

All workers whether in formal or informal sectors must one day retire. Pension is a long-term savings plan that assists workers to plan towards retirement. The federal government’s move is therefore a welcome development. After working hard for a living, a worker deserves peace of mind after retirement. Planning for retirement is one of a worker’s most important decisions.

Possible challenges from the scheme have been identified to include socio-cultural inclinations, documentation challenges, low level of financial literacy, lack of confidence in government, irregular income inflow, low level of ICT literacy, associated transaction costs and low level of education. Other peculiarities of the informal sector include irregular flow of income, highly mobile and flexible jobs, lack of permanent work address, lack of official means of identification, exclusion from pension systems prior to PRA 2014 and high levels of illiteracy.

The envisaged pension scheme for the informal private sector is quite tricky but it will benefit from advancements made in Nigeria’s banking and telecoms sectors in the past decade. The banks have in recent years attracted a lot of informal sector workers into the banking system, which has improved the sector’s organisation and documentation. The banks too have benefitted immensely from advances in telecoms, without which many of their new products and systems would not have been possible. Together these two sectors have greatly assisted the Contributory Pension Scheme. It is the public sector’s transitional pension scheme that is still bedevilled by problems.

Informal sector workers and self-employed persons could as well use the balance in their Retirement Savings Accounts (RSAs) as equity contribution for residential mortgages and support their businesses just as they will benefit from other micro-credit schemes. Pension used to be seen as something for the privileged class but this should no longer be the case in Nigeria. With continued education on saving for retirement, good government, better administration and optimal investment returns on contributions, added to improving financial literacy, the planned introduction of micro pension in the country should provide a better deal for contributors.