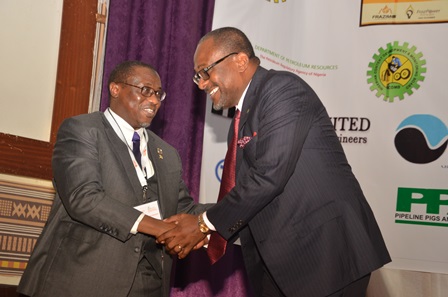 The Group Managing Director of the Nigerian National Petroleum Corporation (NNPC), Dr. Maikanti Baru, has said that an average of 700,000bpd of crude oil was deferred in 2016 due to pipeline sabotage, saying this brought Nigeria’s production down to as low as 1.3 million barrels per day from 2.2 million barrels targeted for the period.

The NNPC GMD, who stated this in a keynote address at the maiden edition of the Nigerian International Pipeline Technology and Security Conference (NIPITECS 2017) in Abuja today, said Year-To-Date 2017, NNPC had recorded twenty–seven (27) breaching incidents on the Trans Niger Pipeline (TNP), adding that for the Trans Forcados Pipeline (TFP) with a capacity of 300,000bpd, seventeen (17) breaches were recorded in 2016.

Dr. Baru declared that Year-To-Date 2017, NNPC had suffered at least fifteen (15) breaching incidents on the TFP, while charging members of the Pipeline Professionals’ Association of Nigeria (PLAN) to conduct a systematic diagnosis of the pipelines system in Nigeria and come up with sustainable and actionable solutions to the menace of pipeline vandalism in the country.

He urged all key players to rally round the Pipeline Professionals to proffer solutions to the pipeline vandalism challenge as it posed a great threat to the Nigerian economy in terms of revenue loss and environmental degradation.

“The foregoing summarizes the effect of pipeline vandalism and therefore underscores the importance of protecting our pipeline system and treating them as National Assets… On the strength of that, we must endeavor to carry out a systematic diagnosis and proffer workable, practicable and actionable solutions that will guarantee sustainability of pipeline infrastructure,” Dr. Baru said.

He listed some of the measures deployed by NNPC to stem the tide of pipeline vandalism to include: Horizontal Directional Drilling (HDD) technology to bury pipelines deeper to prevent easy accessibility; technology-based pipeline surveillance mechanism with capability to detect, alert and deny access; and aerial monitoring and marine patrols by the Military Joint Tax Force (JTF).

Dr. Baru further said government was working out a political solution to the socially-induced-agitation sabotage while the law enforcement agencies had been empowered to deal with those who engage in pipeline vandalism out of criminality such as oil theft.

Speaking earlier on the significance of the conference, Chairman of PLAN, Engr. Geoff Onuoha, said considering the critical role of pipelines to the entire value chain of the oil and gas industry, there was need for a forum like NIPITECS to bring professionals and stakeholders together to brainstorm and share knowledge and technology.

The Executive Secretary of the Nigerian Content Development and Monitoring Board (NCDMB), Engr. Simbi Wabote, who also spoke at the occasion, said the Board was working hard to boost local production of pipes, adding that its efforts were already yielding dividends as Nigeria now has two world class pipe mills in full operation.

On his part, the Director General of Infrastructure Concession Regulatory Commission (ICRC), Engr. Chidi Izuwah, challenged industry players to tap into the opportunities in Public Private Partnership (PPP) to boost pipeline and other infrastructures in the country.

In the same vein, in line with the Presidential mandate of rehabilitating the nation’s three refineries, the Nigerian National Petroleum Corporation has inaugurated eight committees charged with returning the refineries to their nameplate capacities by the year 2019.

While inaugurating the committees on Tuesday, Group Managing Director of the Corporation, Dr. Maikanti Baru, charged them to deploy “out of the box solutions” to ensure that the refineries return to their good old days of top class performance.

“I am convinced that the teams we have selected here today will give the necessary direction towards returning the refineries back to their optimal levels of performance,” the GMD told members of the Committees.

Ndu Ughamadu Group General Manager Group Public Affairs Division of Nigerian National Petroleum Corporation in a statement signed and posted on the corporation site pointed out that the GMD explained that in executing the assignment, the Committees were expected to deliver well and within schedule as according to him, time was of the essence.

“We want to show everyone that we can fully run the refineries. You must all work together to operate them at 100% capacity as this was the only way to ensure profitability,” Dr. Baru stated.

The GMD also emphasized the importance of the workforce as according to him “we can fix the refineries but without the right people to operate them, they would go back to where they were or even worse”.

Earlier in the occasion, during his introductory speech, the Chief Operating Officer Refineries and Petrochemicals, Engr. Anibor Kragha, informed that the 2019 target was since for the first time in 20 years there was both the political will and the economic climate to ensure effective retrofitting of the refineries.

He further said that over 28 Expressions of Interest had been received so far for the financing of the rehabilitation project and that the goal was to get more by the end of the year.

Assuring everyone that the nation would not suffer financially from the project, the COO explained that the approved financial model would guarantee payment to partners only from incremental profits.

Speaking on behalf of the committees, the Chief Financial Officer of the Corporation, Mr. Isiaka Abdulrazaq, reminded members of the newly inaugurated Committees that the rehabilitation of the refineries was one of the targets of the President Buhari administration.

Mr. Abdulrazaq expressed his confidence in every member of the committees to deliver on their various tasks.

The Committees inaugurated for the rehabilitation of the refineries would be be headed by a Steering Committee, chaired by the GMD.

Other Committees are: Rehabilitation; Stakeholder Management; Financing; Legal; Procurement; Pipeline and Crude Oil Supply and Security as well as Staffing and Succession Planning.