Kindly Share This Story:
As part of efforts at recognising hard work and commitment to duty, Promasidor Nigeria Limited recently rewarded thirty-four staff of the company that have worked for 10, 15, and 20 years at a long service awards ceremony during the weekend. 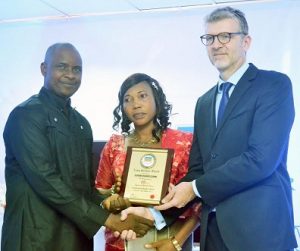 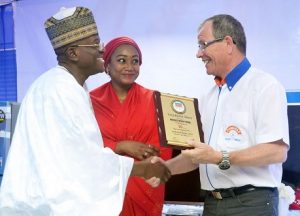 R-L: Technical Director, Promasidor Nigeria Limited, Mr. Michel Coin, presenting 20 years service award to Ndubisi Yerima Venna, Field Sales Department, accompanied by his wife, during Promasidor Nigeria Limited long service awards held on Saturday, March 18, 2017 at Promasidor Nigeria Limited.
He said they are worthy to be rewarded in their various capacity, having worked so hard and have risen from their initial status of employment to higher positions. “The company has deemed it fit to reward them with various gifts as they have contributed in their own capacity to the growth of their departments and the company in general,” Thiry affirmed.
At the ceremony, the awardees were rewarded with various gifts, ranging from Refrigerator, Generator and TV. 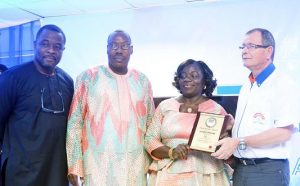 Kindly Share This Story:Frantically, I have never been desperate for anything all my life. Never!…