The efforts of Promasidor Nigeria Limited in elevating the standard of education through its Cowbellpedia Mathematics Television Quiz Show initiative has earned it the ‘Best Company in Education’ in the 2016 Lagos PR Industry Gala and Awards (LaPRIGA) organised by the Nigerian Institute of Public Relations (NIPR), Lagos Chapter recently. 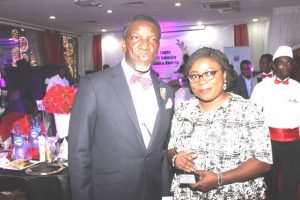 Speaking at the event, the Chairman, Lagos NIPR, Olusegun McMedal, said the consistency of Promasidor’s Cowbellpedia Mathematics Quiz initiative is commendable, and that it has motivated students to have interest in the subject which is a basic requirement in any profession in life. He affirmed that Promasidor has done well in ensuring that students imbibe the culture of having Mathematics as one of their favourite subjects in school.

Receiving the award, the Assistant Brand Manager, Promasidor, Miss. Oluwatooni Odewole, said the award was deserving as it shows the company‘s strong commitment in improving the standard of education and encouraging them to erase the notion that Mathematics is a difficult subject that should be neglected. ‘It is part of the corporate social responsibility (CSR) initiative of the company which has greatly imparted on students’ perception of the subject,’ she stated.

Also on the CSR initiative, the Managing Director of Promasidor Nigeria Limited, Olivier Thiry, said a strong foundation of Science, Technology, Engineering and Mathematics (STEM) education has become very important at this stage when Nigeria is determined to broaden its economic base like that of the developed world.

“STEM courses are pivotal to a nation’s technological advancement and Mathematics, which has historically been seen by students as an unattractive subject is a key component of STEM education,” he said.

To galvanise students’ interest in the subject, the company significantly increased the prize money for the finals of this year’s competition for both students and teachers. This year, the top prize student winner in each category went home with one million naira in addition to an all-expense paid education excursion outside the country. Also, the teachers of the winners in each category got four hundred thousand naira each.

All these improvements, according to the company are to underscore its effort to provide a credible platform that discovers, recognises and rewards excellence in Mathematics, a critical component of Science, Technology, Engineering and Mathematics (STEM) education in Nigeria.

The 2016 edition of the Cowbellpedia Mathematics Television Quiz Show came to a glorious end onSaturday, 5th of November, with Juliet Ekoko and Ayooluwa Oguntade, both of The Ambassadors College, Ota, Ogun State winning the junior and senior categories respectively, with cash prizes of one million naira each and an all-expense paid education excursion outside the country.