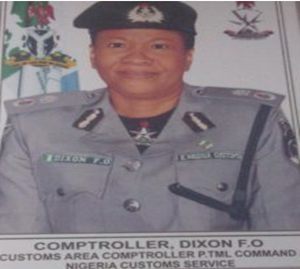 The Port and Terminal Multiservices Limited (PTML) Command of the Nigeria Customs Service has released its financial performance for the month of January 2019 which stood at N14, 850,154,616.00 (Fourteen billion, eight hundred and fifty million, one hundred and fifty four thousand, six hundred and sixteen naira, no kobo) accounted for N9, 967, 7 516,491.00 representing indicating 49 percent increase over the correspondent period

The Command last year undergo some restructured of the operational environment which resulted tremendous changes in performances of officers and men included Stakeholders as a key of compliance ensuring the Federal Government’s 24 hour “Port Operation Executive Order” is keyed into for effective service delivery and optimums productivity.

In a statement, the Spokesperson of the PTML Customs Command, ASC1, Yakubu Mohammed stated that there is a viable framework for 2019, to create manpower to enable the officers and men of the Command have a pleasant working relationship with Stakeholders, block all necessary links to revenue drop.

Yakubu further said that in spite various challenges recorded in 2018 that almost blemished the operations of the Command chances to record remarkable achievements.

In analysis of the financial performances under three years, showed the Comptroller Dixon F. O (Mrs) led Administration surpassed the previous year records by 23.07 percent with a total of N9,967,751,491 billion between the month of January and December last year, as against the total amount of N6,933,421,165.00 raked into the Federation Account same period in 2017, respectively.

In the month of January, this year the Command recorded very outstanding revenue stood at N14, 850,154,616.00 showed a clean records of three years straightway revenue grow consistently. Citing the terminals decongested to create space for more volume of trade as attributed of the financial performance as PRO stated improve in 2019 good business transactions would emerge en-route new innovations.

The Comptr Dixon went further in the revenue performance higher than previous year was commendable. According the PRO of the Command she introduced several factors by institutionalizing necessary infrastructures in order to reposition its services for higher efficiency, because one of her most cardinal assurance is to witness PTML as investors delight.

The Command also said the Anti-smuggling crusade against fraudulent activities, smuggling and other vices were adequately addressed to create an enabling environment for high revenue profile, adding that 2019 has been carefully placed as a top priority, since the Customs Comptroller General, Col. Hameed Ibrahim Ali (Rtd) has directed that there must be suppression of smuggling as well as collection of maximum revenue.

Comptr Dixon said that with the level of compliance by Stakeholders who have promised to adhere to the rules of engagement to avoid being molested due to false declaration and under declaration of their various consignments, the preceding months will experience enormous improvements in revenue, warning that those involved in smuggling activities and other vices should endeavor to relocate their illegal business or face the full strength of the law, that anyone found culpable will be punished, she assured.

The Command, therefore commend the efforts so far demonstrated by the CGC’s Management Team for their support administratively for empowering the officers and men through training and retraining programmes adding that it has impacted on her strength in delivery the services of the command, she said.