REDTV, a dynamic online lifestyle channel that puts the spotlight on Africa with a distinct global appeal,launched its Francophone version on Thursday. 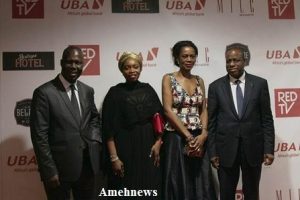 The fun-filled event, supported by  the United Bank for Africa (Plc), was held at the Azalaï Hotel in Abidjan Cote d’Ivoire.  It was witnessed by distinguished players in finance, public and entertainment industries in Franco-Phone Africa’s largest economy and other neighbouring countries. The impressive gathering also featured the screening and premier of REDTV’s first francophone TV series, Boutique Hotel.

With the launch of French language content of REDTV, the lifestyle station has now extended beyond Anglophone Africa into 10 French-speaking countries in which the UBA group operates.

Speaking at the event, the Managing Director of UBA Cote d’Ivoire, Mrs Sarata Kone, noted that the launch is an acknowledgment of the Bank’s recognition of its diversity as a pan-African financial institution with presence in 19 African countries in major financial capitals of London, New York and Paris. This according to her is in tandem with the Africapitalism philosophy of the Chairman of UBA Plc, Tony Elumelu’s call on all Africans to take full responsibility in developing the continent. “Africans should present Africa in a new light, it is up to Africans to change the vision the world has concerning it,” Kone said quoting Elumelu.

Also speaking, Bandama Maurice, Minister of Culture, commended UBA’s unique vision, saying “a development where an organisation like REDTV takes it upon itself to reset the Africa narratives by projecting it as a continent that offers opportunities to its ambitious and talented youth, is not only welcome, but is indeed laudable.”.

Boutique Hotel was produced in collaboration with Alexandra AMON, a young producer and actress from Ivory Coast who won the best prize in the television series of FESPACO Awards with Chroniques Africaines in 2015.

The Boutique Hotel features a young woman, Lola Durant, played by Alexandra Amon, who takes over the reins of a hotel residence once run by her widowed mother. Without experience, Durant faced an uncommon staff and a rather unusual clientele.  This series, where love and low-blows intermingle, is the first francophone programme on REDTV channel. “I am truly happy and proud to contribute in my own way to the Ivorian cinema and even happier that nations like Nigeria chose to trust us in developing our art,” said Amon

Side attractions at the event featured stunning performances with Kiff no Beat and TNT, the most famous band in Cote d Ivoire, thrilling guests who evidently could not resist the enthralling vibes. The dance-floor was filled to capacity as the crowd danced the night away.

UBA with its vast network and capabilities continues to serve customers bearing in mind their importance and exceeding their expectations. As Africa’s Global Bank, UBA will continue not only to serve them, but also to partner with them in order to provide excellent financial services to them.

UBA launched Red TV, an online TV channel designed to inspire and entertain African youth and young people all over the world,‎ on Friday, December 18, 2015 at the UBA Headquarters, Marina, Lagos.

According to the organiser of the event, the Red TV which is powered by UBA, is set to deliver rich, engaging and dynamic video content with just a click of a button.

On that day, the Chairman, Tony Elumelu expressed his joy at the realization of the initiative and reassured viewers that by being online, Red TV will increase the access of Africa’s youth to entertainment, information and inspiration.

Therefore, with the launching of French language content of REDTV, is a dream come true and realisation of vision of the founding father of the RedTV.