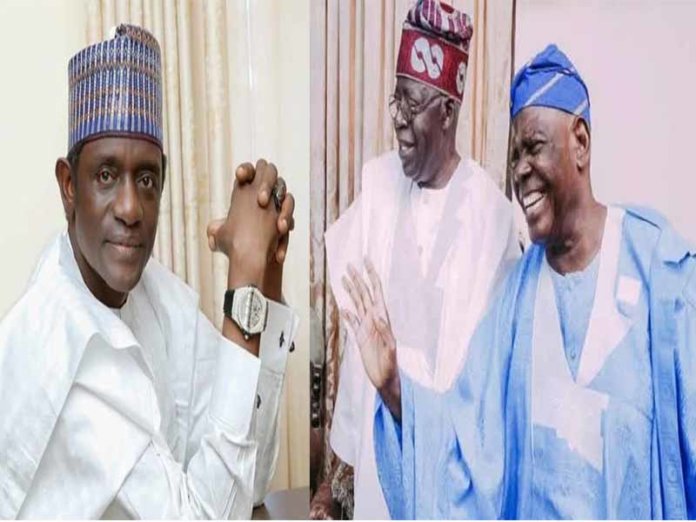 Adedayo Akinwale writes that the ongoing registration and revalidation exercise of the All Progressives Congress has further polarized the power blocs within the ruling party, with the Senator Bola Tinubu’s camp coming out forcefully to condemn the exercise,

When the National Caretaker and Extraordinary Convention Committee of the All Progressives Congress (APC) led by the Governor of Yobe State, Mai Mala Buni sought tenure extension in December, last year from the National Executive Committee (NEC), it was basically for it to conduct membership registration and revalidation exercise, which was hitherto not part of the mandate of the committee when it was initially inaugurated.

The Caretaker committee came into being on June 25, 2020 following the sack of Adams Oshiomhole-led National Working Committee (NWC) and was given six months to conduct National Convention for the party and also reconcile aggrieved party members.

Also, the need to arrest the leadership tussle within the ruling party which was already threatening its existence the Caretaker committee became inevitable.

However, towards the expiration of the first six months last December, the committee sought another six months to conduct revaluation and registration exercise, as well as conduct the national convention. The request was granted by the NEC of the party and the committee’s tenure was extended.

The tenure extension was wholly supported by the APC governors. Political analysts believe that the move was to ensure that the governors tighten their grip on the party structure and to whittle down the influence of the National Leader of the party, Senator Bola Ahmed Tinubu.

Few days before the commencement of the exercise, a member representing Ikeja Federal Constituency in the House of Representatives, Hon. James Faleke, in an open letter to Buni expressed concern over the exercise.

Faleke, who is a Tinubu loyalist said while the effort to update the party’s register was laudable, he expressed worry over the timing.

He said: “The prevailing pandemic situation in Nigeria and the fact of being a COVID-19 survivor have compelled me to write this letter to you as a loyal and committed party member and a patriotic Nigerian. I want to state categorically here that the contents of this letter are my personal opinions based on personal experience, interaction with people and observation of events happening around us daily.

“Personally, I felt the decision to revalidate and conduct new registration of members is a laudable and commendable one. As we move towards another general election in 2023, the need to update our membership register could not have come at a more opportune period.

“However, laudable as the registration plan may be, what about the timing of the exercise? With due respect Sir, it is my considered opinion that the timing is not appropriate at this time, especially given the renewed surge in the spread of COVID as it is being reported on a daily basis by the Presidential Task Force.

“Our Government has for some time given directives to the religious bodies to reduce congressional attendance at both churches and mosques. So many states have cancelled social gatherings. Others are compelling the use of face masks to reduce the rate of infection and fatalities. So why must we go into an exercise that will certainly draw large crowds across the various states?

“The stage is set for the exercise and I must confess that I’m personally impressed with the preparations and logistics put in place for the exercise. I have no doubt in my mind that it will be a resounding success for us and will be a springboard for achieving one strong, united party.”

Faleke was of the opinion that the situation in the country occasioned by the Coronavirus pandemic compelled him to have a rethink on the desirability of continuing with the exercise as planned.

“Mr. Chairman, I’m strongly of the opinion that this exercise should be postponed till a more appropriate time. Personally, I believe this will not only shore up the image of our great party but will also save the lives of Nigerians.”

However, despite opposition from power blocs perceived to be loyal to Tinubu, the membership registration/revalidation got underway last week Saturday with President Buhari assuring party members that endorsement of aspirants at the local or state level would no longer come from Abuja.

Buhari after completing his party membership revalidation exercise in Daura, Kastina State said politicians would no longer be endorsed from Abuja.

“Without any incentive, they must come out and defend the party at any level so that we, you and the party will feel secure and comfortable because the old time of putting hands in the pocket is over because the money is no longer available,” the President said.

While the exercise was peaceful in Kastina, it was a free-for-all in Kwara State when supporters of rival APC factions clashed at a meeting called ahead of the exercise. The violence erupted at the Banquet Hall of Government House where a meeting was being held ahead of the registration exercise.

The APC registration and revalidation committee called the meeting to ensure a smooth registration exercise amid the protracted crisis in the party in Kwara State which worsened after the removal of Bashir Bolarinwa as the party chairman.

Bolarinwa was removed by the national caretaker committee of the party and replaced with Abdullahi Samari two weeks ago.

The development was a fallout of a supremacy battle between Governor AbdulRahman AbdulRazaq and a group of party leaders led by the Minister of Information and Culture, Lai Mohammed and Minister of State for Transportation, Senator Gbemisola Saraki.

The national leadership of the party asked North-central leaders of the party to intervene, but the political waters in the State remains unsettled.

In spite of the fact that the Action Congress of Nigeria (ACN) bloc of the APC is no longer calling the shots in the party as they have been schemed out, Tinubu’s camp drew the battle line when a former Interim National Chairman of the party, Chief Bisi Akande, described the ongoing exercise as an indefensible aberration leading to certain ugly perceptions.

Akande said this during the commencement of the registration and revalidation exercise of the party in his hometown, Ila Orangun, Osun state.

He also declared the National Caretaker and Extraordinary Convention Committee led by Buni as an abnormality. To this end, the party chieftain warned the committee to resist all temptations of sit-tight syndromes that usually characterized most handpicked authorities in parts of the underdeveloped countries of the world.

Akande emphasised that the political party register, as distinct from population census or voters register, is supposed to include the list of opinion leaders with a particular ideological orientation, saying he felt humbled to have been honoured with a singular privilege of presiding over the creation of the original register of the ruling party.

He stressed that he was also proud and happy that the original party register so created was the foundation of all the structures that stimulated the movement and pushed the “inept and corrupt” Peoples Democratic Party (PDP) out of power.

The former Osun state governor warned that the next national election that would elect a successor to President Buhari is going to be the most important test of the ongoing APC membership registration and whatever structure is being envisaged to be imposed on it.

Akande stated: “The first is that, in normal circumstances, a Caretaker Executive Committee for a political party is an abnormality. If not carefully controlled and expeditiously managed, most aberrant authorities end up in contempt and disgrace.

“For this reason, I want to urge the present APC Caretaker Executive Committee to resist all temptations of sit-tight syndromes that usually characterized most handpicked authorities in most underdeveloped countries of the world.

Akande explained that the first perception was that APC already having a well computerised register for an average of 100 leaders of similar ideological orientation per each of the more than 120,000 polling units across Nigeria, might be lacking comprehension and matrix of the modern day technology.

He noted that the second major perception was that APC leadership might be “wasteful and unappreciative” of the proper use of money in a kind of scanty economy in which Nigeria now finds itself.

Akande added: “These seeming ugly perceptions put into abeyance the applause of the two national election successes that the original APC register enjoyed since its completion on 15th February, 2014 and the over N 1billion of 2014’s value that the original register cost when APC had no money of its own. “

Reacting to a statement credited to Akande, Buni insisted that the ongoing exercise was a constitutional provision and a strategic measure taken by the committee to give existing and new members a sense of belonging.

Buni in a statement issued by his Director-General, Press and Media Affairs, Mr. Mamman Mohammed, said the registration and revalidation exercise would assist the party to generate a valid, accurate and up-to-date data on party membership to enhance and support its planning process.

He stated: “Since the initial exercise in 2014, the party has not registered new members nor updated the personal information of our existing members as provided for by the constitution.”

“The registration exercise gives our new members a sense of belonging and the existing members will update their information while those who left the party will have their names removed from the party register,” he added.

Buni also pointed out that the party has through the caretaker committee succeeded in building a new confidence among its members and reassuring them of a new hope in the party.

He noted that the focus of the Caretaker Committee is to strengthen the party through a bottom-up approach and to carry everyone on board, while those aggrieved have happily rejoined APC just as new ones have joined the party.

Buni said that the caretaker committee has reconciled many aggrieved members and factions across the country including the Zamfara state factions among others and bringing in prominent politicians into APC, including the Governor of Ebonyi state, David Umahi.

Analysts believe that while Tinubu’s influence in the party may have reduced when compared with what was obtainable in 2014 during the pre-merger talks, the ruling party would be making a huge mistake thinking the former Lagos state governor and by extension the ACN bloc will be pushed out of the party without a fight.

They added that If the brewing crisis is not managed, and the party allows Tinubu’s camp to pull out of the party, it may be the beginning of the end of APC in the South-west.

A former Interim National Chairman of the party, Chief Bisi Akande, described the ongoing exercise as an indefensible aberration leading to certain ugly perceptions. Akande said this during the commencement of the registration and revalidation exercise of the party in his hometown, Ila Orangun, Osun state. He also declared the National Caretaker and Extraordinary Convention Committee led by Buni as an abnormality. To this end, the party chieftain warned the committee to resist all temptations of sit-tight syndromes that usually characterized most handpicked authorities in parts of the underdeveloped countries of the world. Akande emphasised that the political party register, as distinct from population census or voters register, is supposed to include the list of opinion leaders with a particular ideological orientation, saying he felt humbled to have been honoured with a singular privilege of presiding over the creation of the original register of the ruling party

Senate: We Can’t Be Induced to Screen Ex-Service Chiefs