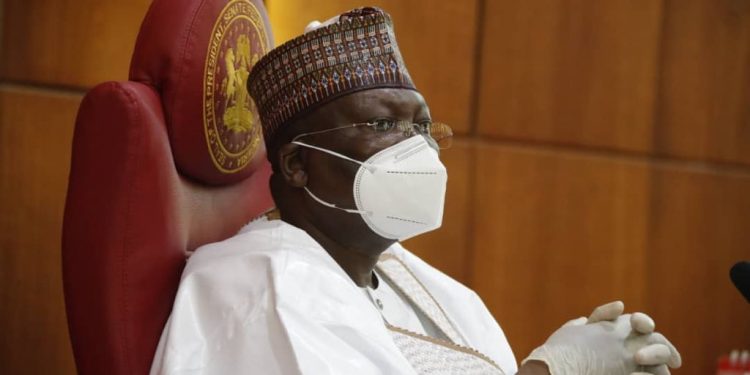 The Federal Government is to spend  N2.951 trillion (as against the N2.4 trillion approved in the earlier bill) on debt service according to provisions  contained in the revised 2020 Appropriation which has just passed its second reading in both houses of the National Assembly.

Members of both chambers however frowned at the increase in the debt serving provision from N2.4 trillion  approved in the 2020 budget in December 2019, to the new figure of N2.95 trillion.

The revised Appropriation Bill saw a reduction in the 2020 budget as passed by the National Assembly in December 2019 to about N10.51 from the initial budget figure of N10.59.

The revised 2020 Appropriation Bill however made no provision for petroleum subsidy, while oil production was reduced from 2.1mbpd to 1.93mbpd.

The oil price benchmark was put at $25 per barrel.

Moving the motion for the budget to be read a second time, Leaders of both chambers, Senator Yahaya Abdullahi and Rep. Ado Doguwa said that N398.505 billion is for Statutory Transfers.

The budget of the National Assembly was however reduced from N128 billion to N115 billion in the revised budget.

N4.928 trillion has been set aside for Recurrent (Non-Debt) Expenditure while the N2.230 trillion is for contribution to the Development Fund for Capital Expenditure for the year ending on 31 December, 2020.

Senate Leader, Yahaya Abdullahi, in his lead debate, recalled that the 2020 Budget was predicated on oil production of 2.18 million barrels per day and a benchmark oil price of $57 dollar per barrel with an exchange rate of N305 to one U.S. dollar.

According to him, the outbreak of the Coronavirus Disease (Covid-19), and its rapid spin into a global pandemic has brought about corresponding economic consequences.

Abdullahi said that as a result of the pandemic, “there has been a slow-down of global economic activities as most countries are on lockdown with movement only limited to essential goods or persons performing essential services.

“Further to the above, most of the assumptions underpinning the 2020 FGN Budget have had to be revised in the face of current realities, as Nigeria is vulnerable to the current global economic disruption caused by the Covid-19 crisis which has led to decline in Crude-oil prices and spikes in risk aversion in the global capital markets.

“Prior to the outbreak of Covid-19 Pandemic, the Nigerian economy had been characterized by wavering external sector and improving internal economic indicators.

“Over-dependence on oil revenue, constrained fiscal space, low foreign and domestic investments and declining foreign reserves made the economy disproportionately vulnerable to the twin shocks of crude oil price/production collapse and a health crisis affecting negatively the informal sector which accounts for over half of the Nigeria’s GDP.”

He attributed the decrease to the impact of the decline in crude oil receipts.

He said “the uncertainty and general decline in global economic activities caused by the Covid-19 Pandemic have further dimmed the prospect of reversing the downward trend in Foreign Portfolio Investments (FPIs) in the Nigerian Treasury Bills (NTBs).

Kindly Share This Story: Following Tuesday’s face-off between a joint committee of the National Assembly…