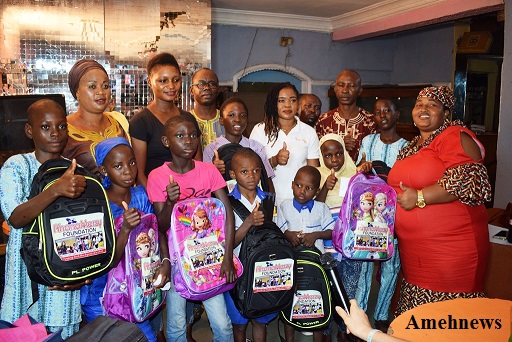 RhanaMerzy is a foundation aimed at seeking the happiness of the less-privileged by providing an opportunity of good life for them. In view of this, the organization, which is non-political, non-religious, has reached out again to the society by empowering 20 kids with educational materials to support them in school.

At the empowerment occasion, which took place on Saturday 9th of September 2017, at Big Brother Cafe, opposite Nigerian Institute of Journalism, Ogba, Lagos, the founder, RhanaMerzy Foundation, Mercy Alexander, said, the primary goal of the foundation is the mission of taking children out of the streets back to the classrooms, and that it is borne out of her true life experience.

She said when the programme started over a year ago, over fifteen students were admitted into various schools and she is pleased with the reports coming from the schools about the good performances of the students, even as she used the opportunity to thank Dr Babatunde Adejare, the Lagos State Commissioner for the Environment, for his invaluable support to the organization since inception.

She used the opportunity to charge parents and guardians of the kids with the responsibilities of making sure the kids do well in school and other endeavours in life. Guests at the event expressed satisfaction at the improvement and level of achievements the foundation has attained in its relatively one year of existence while pleading to the Government and the society at large to support the foundation in whatever ways they can.

NNPC to partners Denmark in Production of Animal Feeds Company