Kindly Share This Story:
BY ALBINUS CHIEDU
Despite several media reports in recent years, seeking the attention of Ogun State Government over the pitiable state of Lafenwa-Mopol Road and other roads in surrounding communities, the state of the road has gone much worse to the extent that visitors and potential business investors  have continued to wonder whether the government is still interested in that part of the state. 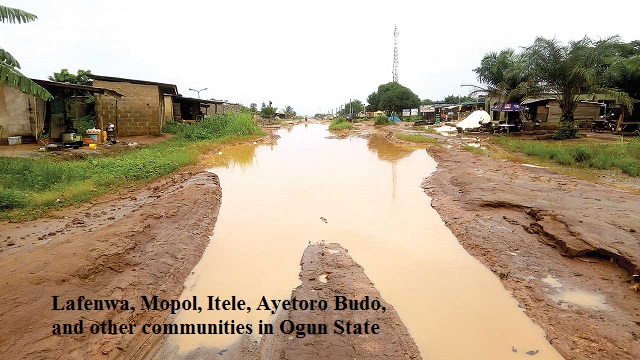 Residents of Lafenwa, Mopol, Itele, Ayetoro Budo, and other communities have been abandoned and their nightmare and challenges are aggravated due to the deplorable state of their roads.
The Guardian reports that for 16 years, the communities have not only been abandoned but have  also been marginalized for long, as previous administrations have denied them dividends of democracy. Many road users who ply this route have one ugly story or another to tell. Their location in-between two states, seems to alienate them from government’s infrastructural programmes. For now, it seems they are on their own.
Currently, the road from Lafenwa to Mopol  is littered with severe potholes, making movement very tasking. For the residents, connecting Lagos via Ayobo has become a near-impossible mission. When The Guardian visited the area, dejection and resignation were written on all the communities, as commercial activities have been badly affected.
A resident, Mr. Samson Adamolekun said the state of the road has scared prospective investors away from the area because it has become a no-go-area. He added that its location was supposed to be a great potential but since it has become inaccessible, owners of factories have moved to other areas.
With few weeks of torrential downpours, the road has gone from bad to worse, making it impassable and completely abandoned. Findings revealed that many residents have abandoned built houses for the city, while tenants are packing out en masse. Vehicles plying the road are easily identified by mud covering their tyres, bumpers and bodies.

For now, only a few commercial motorcyclists dare the route. It is a tortuous journey as passengers most times have to disembark and trek a distance. Shortly after leaving the Lafenwa junction, there is a terrible ditch at Aparadija community, which had eaten a larger chunk of the road. It is an undulating erosion-ridden portion, forcing motorists to abandon the route completely. Commercial buses are still lamenting the damage the road had done to their vehicles.
At the Omokashi bus stop, about 50 metres stretch on the axis has been chopped off by erosion. From Omokashi through MTN bus stop, Cele bus stop, where the diversion links to the main road, Adekoya bus stop, Ayetoro junction and Mopol junction, it is tales of woe, as residents, motorists and other road users are crying to government.
Immediately after the Mopol junction, is the Ayetoro Bridge, which serves as the boundary between Lagos and Ogun. The situation from there towards Ayobo, is a sharp contrast to the Ogun Stateside, as the immediate past administration of Governor Akinwunmi Ambode of Lagos State had rehabilitated the road.
Journeying to Ayetoro area from Lafenwa, which shouldn’t take more than 30 minutes, now, takes about 90 minutes; getting to Ayobo from Ayetoro takes only six minutes, due to Lagos State’s intervention on the road.
A motorcyclist, Olumuyiwa Joshua told The Guardian that the area had been neglected for long. He said aside the issue of bad roads; the area had been sidelined in the scheme of things, adding that past elective political office holders from the area did not help matters.
He stated that the experiences of residents have been pathetic, as they are forced to use the road since they have no option, adding that the rehabilitation of the road is beyond what the communities can do.
A member of the Ado-Odo/Ota Area Community Development Council, Ajao Babatunde told The Guardian, that residents of Ota are really suffering, as the roads continue to limit development and business growth.

“The economy of Ogun State lies in Ota, but it is unfortunate that the government is paying less attention to our roads. If Ambode can commission 22 roads to enhance development and attract more businesses, what stops Ogun from following suit?

“We learnt that Governor Dapo Abiodun has inspected some of the roads, it’s left for him to immediately sign the contract to save his people from severe pains and infrastructure decay. Former Governor, Ibikunle Amosun has disappointed us by neglecting these roads, but our hope lies in the current government. Please come and help us,” he said.
The Nation reports that the Lafenwa-Itele Road has become a disgraceful symbol of utter neglect and a synonym for untold hardship. A mishmash of eroding tarred patches, gullies and miry pools, it starts immediately after descending the Ayobo Bridge, with a roundabout ahead (MOPOL Junction) which points to Aiyetoro Road from the left, then turning to the right, runs straight to Ota albeit through other routes such as Lafenwa Junction, Odan-Otun and Koro Otun. It is also a connecting point to border towns such as Seme and Idiroko.
Heavy duty trucks laden with laterite ply this route daily. Their presence not only contributes to traffic bottleneck but also worsens the condition of the almost impassable road. It is sheer purgatory for some surrounding communities such as Onifade, Adeleye, Kogi-Kajola, Aparadija and a host of others  during the dry season when dust and fog envelope the whole area, and during the rainy season. A journey on this road reveals a grim picture of government insensitivity to the plight of residents of the area.
With a slew of shops along the road closed and abandoned, the area wears a soulless garb and comes across as a backwater region that needs the fresh breath of modernization. The potholes and craters perfectly sum up the pall of retrogression that hangs unabashedly over the Lafenwa-Itele horizon.
This reporter felt the pulse of some residents in what turned out to be a meld of complaints, disappointment and appeals to the state government. An ex-corps member, Taiwo Raji, spews bile as she laments the “pitiable” state of the road and seemingly heartless commercial motorcyclists who charge purse-tearing fares.
“This road is a deathtrap, especially during the rainy season! While I was serving, I ply this route once a week. It is quite sad that for close to two years now, nothing has been done to address the pitiable condition of this road.
“This has made okada riders have a field day as they exploit passengers at will by charging exorbitant prices even when there is no rain. Since it is a major highway that link Seme border, those in authority should do something about it,” she said.
Ayobami Ololade, a secondary school student said: “We are facing hell with regard to the poor condition of this road. Commercial bus drivers, private car owners, even those selling by the roadside are not left out. Once there is excessive rainfall, people are snarled up in traffic, and at times unable to go to work. The presence of tankers and trucks has not helped matters too as this can result in fatal accidents and do further damage to the road. The state government should come to our rescue.”

Oyekunle, a commercial motorcyclist, noted that he does not ply the route because of the deplorable condition and extortion  by highway touts. He added that authorities in the state cannot feign ignorance as an ex-governor once embarked on a tour of the region about four years ago.
In the same manner, a furniture maker, Yakub Ibikunle, spoke candidly as he complained of lack of patronage and dearth of funds to pay his long overdue rent at his current workshop.
“The condition of this road has crippled economic activities. There is an alarming decrease in sales. This is supposed to be an expressway but buses and bikes are facing big problems here. The government should remember us and not concentrate only on Abeokuta. We want to feel the impact of the state government here too.”
According to Bayo, a commercial bus driver and poultry farmer, “the road is simply damaging our vehicles. From MOPOL Junction to Oju Ore, it is a mess. When there is heavy rainfall, transporters find it extremely difficult to move. Before anything, proper drainage system should be constructed to ease the flow of water.”
Also contributing, Pastor Fagboyo said: “We are really suffering here. When the Ayobo end was being tarred, we thought it would be extended to Lafenwa, but it was not to be. Some residents have even abandoned their houses pending when the road will be fixed.”
Obviously dissatisfied with those at the helm of affairs, Bola Oyegunle, a hotelier, decried how her once-booming business had nosedived and the cruelty of double taxation (at state and federal levels) in this era of austerity. The hotel that previously buzzed with many customers now looks drab as a result of the decrepit road.
While making a plea to the new administration to “come to our aid”, she frowned on government officials because “they only come to solicit votes when elections are near, after which they disappear.”
The monarch of Aiyetoro-Itele Town, His Royal Highness (HRH), Oba Adewumi Adeniji, deplored the condition of the road which had been a source of suffering by residents and motorists. He added that the road which was constructed during the era of Otunba Gbenga Daniel, a former governor of the state, was shoddily done and as a result washed off within three years.
He said: “Generally, the road is very bad right from Ota. It was constructed during the time of Otunba  Gbenga Daniel but it was not solid enough. Once there is heavy rainfall, residents and motorists suffer so much. At the roundabout at times, they are held up for many hours because of the sorry state of the road”.

“We are appealing to the government to come to our aid because all the communities in Ado- Odo Ota, the industrial hub of the state, are still backward in terms of social infrastructure,” he said.
Apart from having Governor Dapo Abiodun preside over affairs of Ogun State, these areas have representatives at the Ogun State House of Assembly, the cabinet, the Federal House of Representatives, the Senate and other segments of government. Yet, they use the roads to canvass for votes during electioneering campaigns and do nothing about it after elections, leaving the residents to suffer.
It is time to fix these roads.