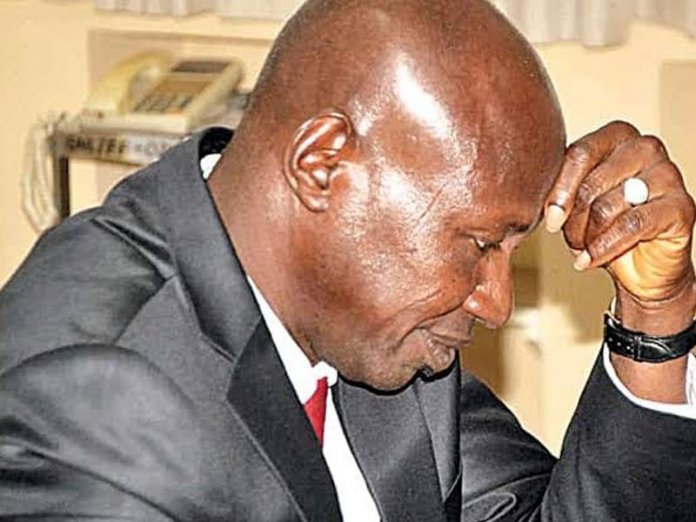 Chairman of the Presidential Panel of Inquiry investigating the allegations of financial impropriety against the suspended Chairman of the Economic and Financial and Crimes Commission (EFCC), Mr. Ibrahim Magu, Justice Ayo Salami, yesterday vowed to press on with investigation into the allegations against the suspended anti-graft boss in order to unearth the truth and ensure that justice is manifestly done.

Salami in a statement denied reports that he expressed regrets over his appointment to head the panel.

He also took a swipe at Magu’s lawyers whom he accused of planting lies about the panel’s proceedings in the media, expressing the determination of the panel to discharge its duties to the letter.

Salami said he never had cause to regret his appointment as chairman of the panel, explaining that he considered it an honour and call to serve.

“I have no cause to express any regret over my chairmanship of the commission, not to talk of betraying any form of emotion before anyone about it,” he said, adding: “I see my appointment to serve as the chairman of the commission of inquiry as an honour and call to service, thus my decision to accept to diligently and patriotically discharge this responsibility.”

He noted that in the cause of his legal career he had handled more challenging cases than the present one.

“There is no doubt that the false reports were aimed at causing mischief and tarnishing my hard-earned reputation and integrity. I remain resolute and committed to the service of the nation and resolute to champion the ideals of justice and fairness,” he said.

He accused Magu’s lawyers of engaging in mischief and blackmail.

“I want to point out that such wild claims and allegations against me and the commission are not strange to me given the manner in which the lawyers to Magu have been carrying on in the conduct of their client’s case before the commission, planting such lies in the media about the proceedings at the panel has been their past time.

“They believe that by engaging in such media propaganda against the commission that their client can easily be absolved of various allegations that have been brought against him,” he said.

He insisted that such allegations and blackmail would not deter the commission from concluding its assignment.

He said the judicial commission of inquiry would continue to investigate the allegations in order to unearth the truth and ensure that justice is manifestly done.

Meanwhile, Magu’s counsel, Mr. Wahab Shittu, said reports of Magu’s closing remarks at the panel were twisted out of context.

He said: “We wish to state that this story was twisted fundamentally out of context by my client’s accusers who want to hit back at my client without justification.

“It is true that Magu and my humble self addressed the panel at the conclusion of his defence, while Magu clarified that he threw himself to the job of acting chair because of his passion for the anti-corruption war, a situation that may be alleged overzealousness in some quarters.

“He, however, pleaded for justice and fair-play by the panel members in the context of his overall achievements and his fledging career, which hitherto remain unblemished and will terminate in two years’ time.”

Counsel to Magu also urged the panel members in the interest of fear of God and loyalty to their conscience to ensure justice in the matter.

He concluded by thanking them for their patience and understanding throughout the proceedings.

“At no time did Magu admit to guilt to the allegations, the subject matter of the inquiry. Indeed the only thing going for Magu is his conviction of his innocence.

“A member of the panel had cause to inquire from me whether I am convinced that the panel will do justice to my client. I responded in the affirmative and I hope my optimism of the justice of the process at the end will not be illusory,” he said.