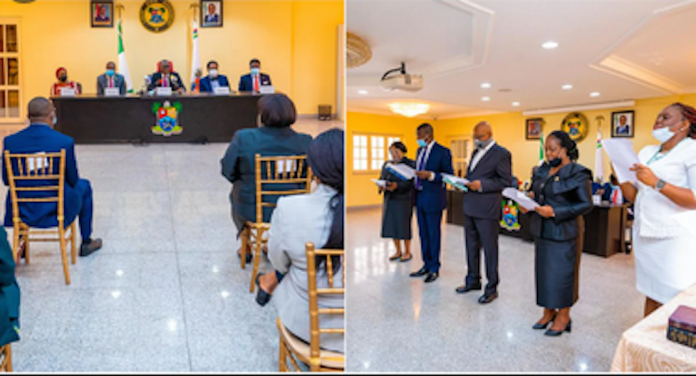 In Lagos, the members of the panel took their oath at the State House, Marina, yesterday.

The panel members, led by the chairman, Justice Doris Okuwobi, immediately moved to Ikoyi for their inaugural proceeding.

Speaking during the inauguration, Sanwo-Olu said the swiftness of the process of the panel members’ composition was an indication of the state government’s sincerity towards the quick resolution of the issues that led to the #EndSARS nationwide protests against alleged police brutality.

Sanwo-Olu said the government selected an unblemished retired judge to head the inquiry tribunal, given the enormity of the task at hand and the need to uphold the tenets of due process and fair hearing.

“In the last two weeks, we have witnessed pockets of justified protests by our youths against police brutality. The pain of our young ones has been felt in various parts of Lagos and country as well as in the diaspora. The protesters have spoken in one voice against the unbridled violation of fundamental rights and lives by the disbanded SARS operatives.

“In my engagements with the protesters, they handed me a list of five immediate demands, which I personally presented to President Muhammadu Buhari last Tuesday.

Before then, I had taken action on some of their demands, which included the immediate release of all those detained on account of their participation in the EndSARS protests and the raising of N200 million victims fund for compensation to families and individuals who were victimised by officers of the disbanded SARS.
“In response to one of the demands of our youths and in line with the resolution of the National Economic Council on October 15, 2020, chaired by the Vice President, Prof. Yemi Osinbajo, the Lagos State Government has constituted a judicial panel of inquiry and restitution under the chairmanship of a retired judge of the Lagos High Court, Justice Doris Okuwobi. We assure all victims that justice will be served,” he added.

Sanwo-Olu said the panel took its legitimacy from Section 5 of Tribunals of Inquiry Law, Laws of Lagos State, 2015, stressing that the panel has powers to procure evidence and summon any person to attend its proceedings to give evidence or produce any document or other thing in the person’s possession.

Justice Okuwobi, who spoke on behalf of the tribunal members, said the EndSARS protests had proven formidable to elicit positive actions to re-awaken consciousness of the government on the need to address injustice meted out to members of the public by SARS operatives.

Also speaking in Asaba while inaugurating the panel, Okowa announced that the state government would establish a Special Victims’ Support Fund for the payment of monetary compensation to victims of police brutality or related extrajudicial killings in the state.

He charged the body to bring justice to victims.

Okowa said it was unfortunate that those empowered to protect Nigerians were killing and brutalising them, and urged the panel to unearth all human rights abuses by the disbanded Special Anti-robbery Squad (SARS) of the Nigeria Police Force and deliver justice to the victims and succour to grieving families.

He also charged the panel to evolve ways that culprits of police brutality and killing of Nigerians would be dealt with, and expressed optimism that the enquiry would bring about total reformation and transformation of the police force for the good of the country.

“Interestingly, the EndSARS protests were triggered by an event in Ughelli, Delta State. It is a tragedy that so many young lives have been brutalised and allegedly wasted at the hands of those who were supposed to protect and serve the people.

“I join my voice to that of the Vice-President, Professor Yemi Osinbajo, in apologising for the failure of leadership to detect and address these anomalies early enough,” he stated.

In Edo State, the government also set up a 12-man judicial panel of inquiry.
The Secretary to the State Government, Mr. Osarodion Ogie, in a statement, said the panel has 90 days to complete its assignment.

According to him, the panel was set up “in response to the yearnings of Nigerian youths, as articulated in the demands of the #Endsars protesters.”
The panel is chaired by Justice Ada Ehigiamusoe, while Mrs. Joyce Ugbodaga is the secretary.

The Ogun State Government equally inaugurated an eight-man judicial panel of investigation to probe the alleged human rights abuses and police brutality in the state.

Justice Solomon Olugbemi will head the panel while Oluwatosin Ogundele is the secretary.

Addressing the panel members at the State Executive Chamber of the governor’s office in the state capital, Governor Abiodun charged them to discharge their assignment with the utmost sense of responsibility to the people of the state.

The judicial panel of investigation which has six months to discharge its responsibility has as part of its terms of reference, to receive and investigate complaints of police brutality and human rights abuse, evaluate evidence brought before it, and recommend compensation where necessary.

Speaking during the inauguration of the panel yesterday, the Deputy Governor, Dr. Hadiza Balarabe, said the federal and state governments had endorsed the demand for police reforms.

She described the constitution of the panel as “a firm signal that impunity will not be tolerated,” adding that the inquiry is aimed at establishing accountability for unlawful conduct by police personnel.

The seven-member panel has retired as members AIG Lawal Tanko (rtd), Mrs. Rebecca Sako-John and Mustapha Jumare as members representing the civil society, among others.

The commission has six months to conclude the assignment and submit its report.

CAN Cautions against Using Military to Quell Protests