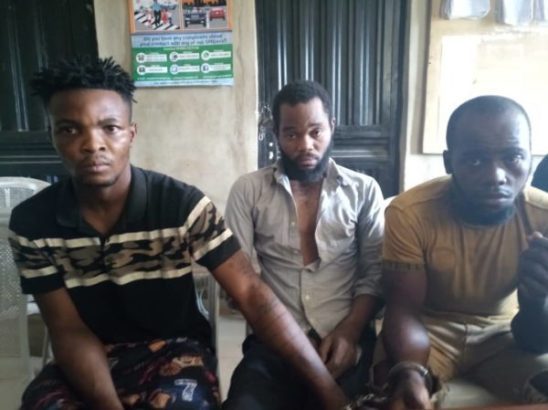 The gang allegedly committed the dastardly act after collecting N1.6 million from their victims: Alhaji Yakubu Musa and Alhaji Hassan Umoru, both from Kebbi State.

Not done, it dumped the corpses in a septic tank located in an abandoned property in Odogunyan area of Ikorodu.

The unsuspecting operators were invited by members of the gang on March 14, 2019, to sell dollars to them, Vanguard reports.

However, when they arrived at Trailer park bus-stop, Odogunyan, where the supposed transaction was to take place, they were taken to an abandoned building where they were abducted.

Thereafter, they were shot dead with their families members left in the dark over their whereabouts.

Meanwhile, when information of their disappearance reached the Police, it was gathered that the Lagos State Police Command boss, CP Zubairu Muazu, directed the officer-in-charge of SARS, CSP Peter Gana, to unearth the circumstance surrounding the incident and bring the perpetrators to book.

Payment of N1.6 million ransom was traced to a GTB account holder, one Oluwafunke, who was subsequently arrested on March 23, 2019.

Though she admitted during an interrogation to have been paid N100,000 for releasing her account for the transaction, she, however, said she was unaware of the circumstances surrounding the transaction.

She mentioned one Olarewaju Oluwatosin, as the person that paid the money into her account.

His arrest further led to those of two suspected members of the gang identified as Mayowa Olaeuni, a.k.a general and Babatunde Idris, 26.

Three guns and a cutlass were recovered from the gang, while three others are still on the run according to the Police.

During the preliminary investigation, operatives discovered that the gang, most of which members are of the Eiye confraternity, had used the abandoned building as shallow graves where members of rival cult groups who were killed during a fight, were buried.

Among those suspected to have been buried at the shallow graves, were two prominent members of the Aiye cult group.

One of their identities was given as Terminator, a suspected leader of the Aiye cult group.

It took six days to plan the deal, one of the suspects, an electrical/electronics graduate from the University of Ilorin, Oluwatosin, gave a startling account on how the Bureau- de-Change operators were killed.

He said, “The initial intention was never to kill them but to collect money from them. Pencil (fleeing suspected leader of the gang) brought the suggestion of robbing the operators.

“Both of us planned the deal for six days. He said I should convince the operators to come that an Alhaja wanted to buy dollars.

“It was on a Thursday. They came in a bike and called us from Trailer Park bus-stop, Odogunyan. Pencil directed a motorbike man to take the operators to a boys’ quarter.

“By the time I joined them at the boys quarters, I met them lying down with their hands bound. Pencil asked me to lie on the floor too, so as to make it look like I am not part of them. Pencil told them that the Alhaja they (operators) came to meet was owing him money and that he and members had come to collect the money.

“They started beating the operators. I also received my fair share of the beating to make it look real since they (operators) knew me.

“The operators begged Pencil to stop beating them, that they would give them money for their freedom. Pencil instructed them to transfer the money into one Femi’s account.

“But when he called to know if the amount had been paid, the account holder said no.

” At that point, he (Pencil) changed the game plan. He threatened to kill me alongside the operators if he did not receive an alert on the payment.

“He said he suspected I was playing pranks by asking the person at the other end not to release the money to him.

“He said if he did not receive the alert by 4.55p.m., he would kill all of us. At that point, one of the operators suggested that another account, preferably GTB, should be given to him to transfer the amount into.

“That was when I contacted the nurse that treated me when I was sick. She provided her account where N1.6 million was paid into.

“By 8p.m. same day, Pencil and Kenneth tore the operator’s clothes, used it to cover their mouths. When I asked why Pencil asked if I wanted to teach him his job.

“He took one of the operators to the back and later sent for the second one. He burnt their clothes, shoes and phones and said he would kill them because they would identify me to the Police if allowed to go scot free.

He took one of them to a corner, killed him and sent for the other. By the time he came to where I was, he said he had settled the case and threatened to kill us if anything that transpired there was heard outside.

”He detained me there till the next day, from where we went to Tamaga side by 6a.m. next day. We stayed there until 9a.m. before he instructed me to call the woman in whose account the N1.6 million was paid.

Pencil called his motorbike man to take Kenneth and me to the woman’s place where she gave us N500,000.