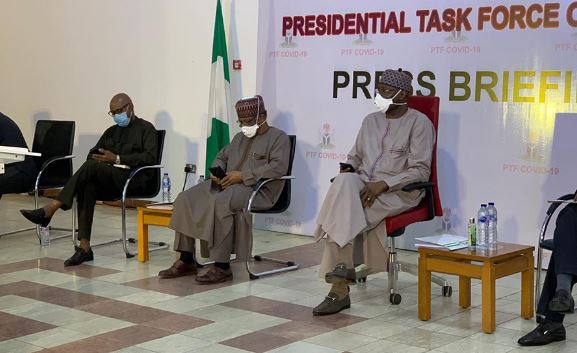 THE Federal Government on Monday advised stakeholders in the education sector to ensure adherence to COVID-19 prevention protocols as schools open for exit classes.

Secretary to the Government of the Federation and PTF Chairman Boss Mustapha said during a briefing in Abuja that all stakeholders must ensure strict compliance with precautionary measures.

Mustapha said: “I wish to restate that the education sector is critical for the development of our children and our nation.

“Reopening the sector is also a source of concern based on the fact that the school system remains a veritable ground for increasing community transmission if appropriate protocols are not put in place and more importantly adhered to.

“In this regard, the PTF wishes to implore stakeholders to ensure that the agreed protocols are put in place and measures strictly adhered to.

“The PTF continues to push forward with the community engagement, risk communication and support to states.

“There is on-going surveillance in the high burden local government areas just as we ramp up our precision efforts.

“Similarly, the Federal Government is supporting the states to firm up their Incidence Action Plans, preparatory to their accessing the World Bank facility for the fight against COVID-19.”

The SGF said the PTF will soon submit its sixth interim report to the President.

He said: “Subject to his approval, we hope to present the way forward to Nigerians at the next briefing on August 6, 2020 (Thursday),” he said.

The Federal Government on Monday announced the reopening of the 104 unity colleges for Senior Secondary Three (SS3) pupils today to enable them to sit for the Senior Secondary School Certificate Examination (SSSCE).

Minister of State for Education, Chukwuemeka Nwajiuba, stated this at the end of a virtual meeting with commissioners for education and other stakeholders.

Federal Ministry of Education Press and Public Relations Director, Ben Goong, said in a statement that all returning pupils are to undergo temperature checks and observe other COVID-19 protocols before being allowed into schools.

“From today (yesterday), the Minister of State for Education, Permanent Secretary and directors will embark on an assessment tour of all unity colleges to ascertain and confirm the reports they have received from their principals.

“Similarly, Federal Education Quality Assurance Directors deployed to the states have been directed to monitor compliance in their respective states.”

Goong said commissioners of education were urged to embark on assessment tours to ascertain the level of preparations for reopening.

FCTA Educations Secretariat warned schools that have not been inspected and certified as ready for resumption by the Department of Quality Assurance of the Education not to reopen.

Acting Secretary for Education, Umaru Marafa, said in a statement: “All schools in the FCT can re-open for exit pupils only on August 4, 2020 for preparation for their examinations, i.e. WASSCE and Basic Education Certificate Examinations (BECE).”

Private and public schools in the Southeast will resume today for exit classes only.

This is part of the resolutions by the governors at their meeting on Sunday.

A communique by the Director-General of the Southeast Governors Forum, Prof. Uchenna Ortuanya, said the states have begun the decontamination of schools.

The statement said the governors are also providing hand sanitizers and water in line with COVID-19 NCDC protocols.

“Random sampling of COVID-19 tests shall be conducted on the teachers and students.

“Health workers shall be sent to the schools to train the teachers and students on COVID-19 protocols and to also enforce same,” the statement said.

Commissioner for Education Mrs. Folasade Adefisayo disregarding the policy would lead to sanctions.

She urged schools not to exceed the 20-per class capacity limit set by the government to check the spread of COVID-19.

Adefisayo spoke when she visited schools in Yaba, Surulere and Apapa under Education District IV.

She expressed satisfaction with their level of preparedness, saying the random visits would continue until all schools are covered.

Many schools monitored by our reporters observed re-opening safety protocols.

They had banners/posters in strategic places bearing messages about COVID-19; water and soap were available for handwashing; infrared computers for temperature checks were provided; chairs were spaced out in the classrooms.

In Niger State, the National Association of Proprietors of Private Schools has set up a Task Force to inspect the level of members’ compliance towards meeting the requirements for schools reopening.

The task force, according to the Niger State NAPPS President, Mr Femi Alalade, will inspect all the schools and will not allow any school that has not met the requirements to open.

In Jigawa State, only 40 schools will be opened for at the first instance.

Governor Muhammadu Abubakar told reporters that the reopening would be done in phases for effective monitoring.

“Ten senior secondary schools would be open across the state to pilot the schools opening for a certain period to observe the situation to ensure all protocols and guidelines on COVID-19.

“Also, 10 junior secondary and primary schools would open. We will also allow 10 private schools to open.

“So, all in all, 40 schools would be open and I have directed the commissioners for health and education to work together and ensure the strict compliance with the Federal Government guidelines,” the governor said.

SSS3 pupils in Oyo State resumed on Monday after the Eid-el-Kabir holidays.

Pupils in the three exit classes resumed on July 6 for revision following the COVID-19 lockdown.

Oyo was the first state to allow pupils in exit classes to resume.

Our reporter observed that pupils and teachers observed COVID-19 protocols in the schools visited, as hand-washing facilities were provided at the entrances and in strategic locations, while almost everyone wore a face mask.

The Delta Government has begun a sensitisation programme for teachers in Ika North-East Local Government Area on preventive measures.

The Kaduna State Government has directed secondary schools to open from August 10 for SS3 pupils.

Commissioner for Education, Dr Shehu Mohammed, said in a statement: “All administrators of public and private schools are to note that the one-week period commencing from today (yesterday) is to allow for necessary preparations and arrangements to meet COVID-19 guidelines for the opening of schools.

“Principals are to ensure compliance to agreed guidelines, which include reduced hours of work/revision to four hours per shift, social distancing in classes, laboratories, libraries and hostels.

“To make the environment safe and conducive for academic activity, the government is doing everything possible to decontaminate and disinfect public schools, including higher institutions and provide handwashing facilities.

“However, parents are advised to equip their children with extra face masks and small 100ml hand sanitisers for use during their transportation to and from schools.”

Bayelsa State Government said it has taken steps to make sure schools are safe for reopening.

A COVID-19 prevention training for private and public schools representatives is holding today.

Akpor, who is a member of the Bayelsa COVID-19 Task Force, said Governor Douye Diri, who chairs the task force, had approved the deployment of health professionals to schools while temporary isolation facilities would be set up.

He said: “The government is providing facemasks, infrared thermometers and access to water, and for schools without water supply, alternative arrangements are in place and we are poised to check the spread of the coronavirus,” he said during a radio programme.

Kwara State government on Monday gave out 65,000 facemasks for distribution to schools for SSS3 pupils.

Deputy Governor and Chairman of the Kwara State Technical Committee on COVID-19, Kayode Alabi, presented the facemasks to the Commissioner for Education and Human Capital Development, Hajia Bisola Ahmed, for onward distribution.

“This is the first phase as we are also giving out sanitisers while the ministry of education, working with the committee and stakeholders in the sector, has been mandated to ensure that safety rules are adhered to,” he said.