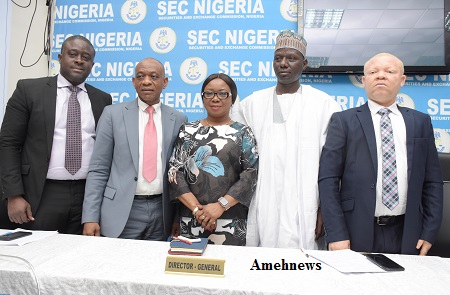 The Securities and Exchange Commission (SEC) on Friday March 22, 2019 said the commission has made progress in attempting to resolve the issues around transmission of shares related to the estate of deceased investors.

The Acting Director General of the Commission Ms Mary Uduk disclosed this while briefing the Capital Market Correspondents at the post Capital Market Committee (CMC) meeting in Lagos saying this process has commenced with the Lagos State Probate Registry and the Commission, with the support of relevant stakeholders, shall carry out an engagement/enlightenment programme for the probate registry”.

SEC DG commences on the issue of Electronic Initial Public Offer (E-IPO) saying the draft framework for its implementation has been developed and presented at the CMC meeting. Pointing out that they have exposed the framework and rules guiding the E-IPO, and stakeholders now have up till Friday, March 29, 2019 to review and send their suggestions for improvement.

She disclosed that there was engagement between the Commission and the Central Bank of Nigeria (CBN) on margin lending has since commenced. However, deliberations are still ongoing on the inclusion of Bank shares in the margin list, added she.

“The market wide committee on identity management and account validation for transactions in the capital market was enjoined to fast track its activities. In furtherance of this initiative, the Commission is to engage the CBN to facilitate the validation process through NIBBS adding that the existence of harmonious relationship between the two agencies is very vital to the development of the Nigerian capital market.

In responding to some questions on if the discussion with CBN will yield the desired result for the stock brokage community in view of past experiences on margin lending. The Acting Executive Commissioner in charge of Operations, Isiyaku Tilde, noted that the commission discovered that there have been zero activities since the rules guiding margin lending was introduced after the financial crisis in 2008 and 2009.

Tilde said the expectation of the commission is that after all necessary things has been put in place to prevent past negative experience, the aim is to get the segment of the market active. Parts of the areas to look out for include risk base and capacity of participating operators.  Other highlights of the meeting that was held on Thursday March 21, 2019, according to the Acting SEC director general, is the plan to constitute a technical committee that will address mutual issues of concern between the commission and the Corporate Affairs Commission (CAC).

SEC Boss noted that it was acknowledged that the Dematerialization exercise was successful. However, the implementation of this initiative was restricted to shares of listed companies, added she. Consequently, the CMC is advocating for the extension of the exercise to shares of unlisted public companies in other to enhance liquidity and ease market processes.

“The market advocated for the Commission to take strong actions against Company secretaries who aid the trade of shares of unlisted public company outside a SEC recognized platform as required by the law.”

To showcase the immense potentials of the commodities ecosystem to the economies of sub-nationals, Ms Uduk said the commission, in collaboration with the commodities ecosystem implementation committee, is planning activities to sensitize members of the Nigerian Governors Forum, especially now that general elections are over. “To this end, an international conference is being proposed to hold in September 2019, with experts from within and other jurisdictions expected to be in attendance”.

“The market was also informed of some successes recorded thus far in the regularization of multiple share subscription. Through this exercise, some Nigerian investors in diaspora have been able to consolidate their shareholding accounts. Similarly, several local investors with numerous accounts have also been able to consolidate their investments.

“We therefore enjoin the general public to take advantage of this initiative to regularize their shareholding accounts before the December 31, 2019 deadline. We crave the indulgence of the gentlemen of the press to sensitize the public on this initiative

Ms Uduk also commented on the 3rd in the series of the commission Budget Seminar where the role of the capital market in effective budget implementation were discussed, which culminated with the first Awards Night in recognition of individuals or groups who have partnered with the commission towards achieving the initiatives in the SEC 10-year Capital Market Master Plan.

DEEP BLUE PROJECT WILL END CRIMINALITIES IN OUR WATERS – FG