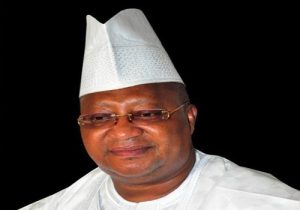 The Management and staff of the Securities and Exchange Commission received with sadness the news of the death of Distinguished Senator Isiaka Adetunji Adeleke whose demise occurred on April 23, 2017 in Osogbo, Osun State at the age of 62.

Following his heroic emergence as the first civilian Governor of Osun State in 1992, the Late Senator Adeleke swiftly earned the respect of the political class and was seen by many as a political figure to be associated with, which earned him the nickname “Serubawon”.

As a resolute advocate for implementation of the Master-Plan, the late Senator Adeleke till his death, remained supportive to the activities of the Securities and Exchange Commission tailored towards implementing the initiatives of the Nigerian Capital Market Master-Plan. This unwavering support was exhibited in June 2016, when the Distinguished Senator in conjunction with other legislators championed a call for the amendment of laws which affected investment business in Nigeria. A similar feat re-occurred in March 2017, when he chaired a public hearing which has set in motion the process for the creation of an Unclaimed Dividend Trust Fund.

Indeed, the death of the Late Distinguished Senator Isiaka Adetunji Adeleke is a great loss to the Nigerian capital market and to our great Nation. While we grief on the vacuum his departure has created, we commiserate with his family, the National Assembly, the Government and good people of Osun State on this loss.

Distinguished Senator Isiaka Adetunji Adeleke has since been buried in his home town of Ede according to Islamic rites.

May Almighty Allah forgive his sins and grant him Jannatul Firdaus