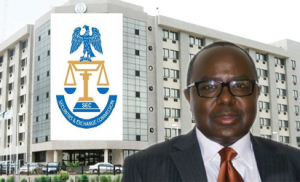 The management of the Securities and Exchange Commission (SEC) may soon experience an industrial crisis among its work force as workers have picked hole of poor welfare conditions and victimisation, among others against the commission.

Already, the workers’ union under the aegis of the Association of Senior Civil Servants of Nigeria (ASCSN), which is an affiliate of the Trade Union Congress of Nigeria, has written a petition to the Minister of Labour and Productivity, Dr. Chris Ngige, over the issue.

The petition letter was signed by the Secretary-General of the union, Isaac Ojemhenke dated March 22, 2017 with reference number ASCSN/ABJ/FML&E/VOL. VIII/330 to the minister and recieved acknowledgement copy of the said letter to the office of the minister dated March 22 was obtained by the union.

Furthermore,  the union in their letter, alleged that the management of SEC was victimising the officers of the union through what it called a “kangaroo disciplinary/investigation committee… on trumped charges against SEC’s own due process.”

The union pointed out that, “In accordance with Section 4 of the Trade Dispute Act Cap T8 of 2004, the Association of Senior Civil Servants of Nigeria hereby gives a notice that a trade dispute has been declared between the ASCSN and SEC.

“Points in dispute are unrelenting victimisation of our unit executive officers, and invitations issued to appear before a kangaroo disciplinary/investigation committee instead of the regular/standing disciplinary committee on trumped up charges against SEC’s own due process.”

The workers’ union also alleged “wrong application of the provisions of the SEC’s staff manual by SEC management and unfair labour practices by the management of the commission.”

The union in the letter stated that all efforts to draw the attention of the SEC management to the alleged irregularities inherent in its current actions had proved abortive.

The Union therefore called on the minister of labour to intervene in the matter in order to avoid a situation where activities of the commission would be adversely affected by unexpected industrial crisis.

According to the report, when contacted, the Head, Corporate Communications, SEC, Naif Abdusalam, said that the allegations by the union were untrue.

Abdusalam disclosed that, “Two of the union leaders have some issues. One has to do with his documentation with SEC in terms of credentials; and the other one has to do with the issue on financials.

“SEC set up an investigative panel to review their cases, hence the allegation. Staff welfare in SEC is of utmost priority to management. All promotions are cleared and all payments are done as when due.”

The impact of NCC’s regulation on ICT development