The investor protection initiatives of the Securities and Exchange Commission (SEC) received a boost last weekend when an investor,  Rev. Fr. Samuel Ukeje Ikechukwu received a cheque for the sum of N1.5m for his share that were illegally sold. 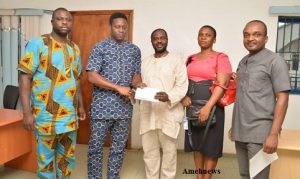 According to Ukeje who is resident in Italy, he bought the Guaranty Trust Bank shares eight years ago through Cashville Investment and Securities but was surprised to learn that the shares had been sold by the company without his knowledge.

Ukeje said he became suspicious when he was not receiving any dividend warrant nor bonuses like others who invested in the shares adding that upon further investigation, he realised that the shares had been sold without his knowledge.

The complainant said he lodged a complaint with SEC in January 2015 and after thorough investigation by the Commission, the money was recovered and he was called by the SEC police Unit on January 4th to pick up his cheque.

Although he is happy with the efforts by the commission and commended them for their investor protection initiatives, he wants the company to be further penalised to serve as deterrent to Others.

He said ” I believe the company should be penalized further because the value of my money when I bought the shares and what it is today is not the same thing as the nation’s currency has greatly depreciated”.

He expressed his gratitude to the Commission for how the matter was investigated and a solution reached.