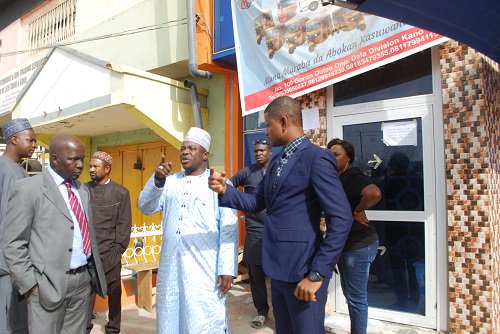 The Securities and Exchange Commission said on Wednesday that it had sealed off the premises of Dantata Success and Profitable Company in Kano for engaging in illegal capital market activities.

A statement from the commission said the firm was shut down for carrying out investment operations that fell within fund management without registration with the apex regulator.

It said, “The company is not registered with SEC and according to Section 13 of the Investment and Securities Act 2007, the commission has powers to shut down any company carrying out capital market activities without due registration.

“Nigerian laws provide that business activities in the country have to be regulated; and in this case, SEC is supposed to regulate them.”

SEC added that the firm was soliciting funds from unsuspecting members of the public by enticing them with returns of monthly interest on investment of between 25 per cent and 50 per cent, depending on the nature and investment type.

It said the firm also indicated a registration period of February 5 to 15 in one of its numerous notices directing all prospective customers to make deposits into its bank accounts.

“The company sells its forms to prospective investors according to their investment plans ranging from N1,000 to N3,000. The minimum amount investable is N50,000 while the maximum is N5,000,000,” the commission added.

According to the statement, the investment period of the scheme is pegged at a minimum of 30 working days to a maximum period of 12 months with offers of interest rates on short- and medium-term basis.

It said it had established that the firm’s activities also constituted an infraction of the Investments and Securities Act 2007.

The commission explained that the closure was to end unlawful activities of the firm against unsuspecting investors, urging investors to ensure that they only deal with registered fund managers.

According to SEC, the account of the firm has been frozen, the promoters have been arrested by the Nigeria Police and are undergoing interrogation as the firm’s operations are illegal.

“SEC, therefore, advises the public to exercise due diligence and caution in the course of making investment decisions. A valid licence of lawful operators can be obtained on the commission’s website by members of the public to confirm the licences of firms with which they intend to carry out investment activities,” the statement added.