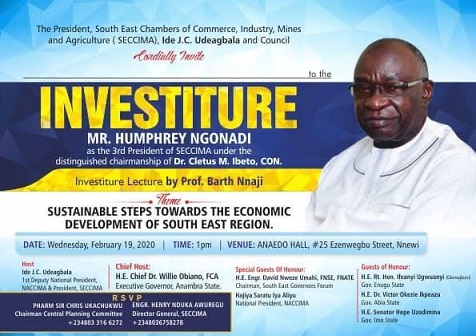 Speaking at the occasion, the industrialist who is also a philanthropist said the need for the donation arose as a result of appeal made to him by the management of (NAUTH), adding that himself and his family contributed to making the project a reality within one year.

Ngonadi called on other wealthy individuals in the Soviet to come to the aid of the less privileged in our society.

He stressed that the government alone cannot provide all the needs of the people in view of dwindling resources of the government.

He promised more donations to the hospital in the days ahead to meet the medical needs of the community.

Speaking also, the philanthropist  son, Obinna Ngonadi, notes that himself and the siblings pulled resources together to support their father fulfill his dream of providing medical facilities to the community.

She pointed out that the government has much responsibilities on its shoulder, saying that wealthy Nigerians should emulate foreign phlanttropists who generously give out theier had earned resources to the society.

“(I appeal to the rich NACCIMA wealthy members and the society at large to lend a helping hand to the less privileged in our society,” she stressed.

Responding, the Chief medical director of the institute, Prof. Anthony Igwegbe who was represented by Dr. Ezejiofor Ugochukwu, who is the deputy chairman, Medical Advisory Commeettee of the hospital commend the benefactor for his great philanthropic gesture.

“Our vissision in NAUTH is to be the best tertiary hospital east of the Niger, which we strive to achieve offering high quality services by well trained, motivated and client-friedly staff,” he emphasized.

The NAUTH Boss appealed to Ngonadi and other wealthy individuals to assist the institute on its bud to move to its permanent site.