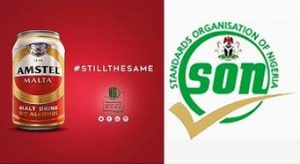 Following the recent discovery of serial attempts to defame Amstel Malta, through concocted video productions, the nation’s security agencies have begun a massive cyber hunt for the brains behind the act.

In August 2016, Amstel Malta, the premium, low sugar formulated malt drink from the stable of Nigerian Breweries, launched a new credential campaign #WhyAddMore. Shortly after the campaign, a picture went viral that a fake version of the Amstel Malta is in circulation. This was because the new packaging wore the new NIS logo while the old packaging had the old NIS logo of the Standard Organisation of Nigeria.

Soon after this, the Nigerian consumers were greeted with another offensive video of an Amstel Malta can drink allegedly containing a strange object. A faceless consumer recorded an alleged contaminated drink and circulated it on social media.

The company thereafter reported the defamation attempt to the security agencies for further investigation.

However, the Standard Organisation of Nigeria (SON), the statutory body that is vested with the responsibility of standardising and regulating the quality of all products in Nigeria, debunked the claims by a faceless video producer of a fake Amstel Malta in circulation.

Fred Akingbesote, Deputy Director, who represented the Director General of the organisation, explained to Journalists in Lagos that Nigerian Breweries have met all SON safety and quality requirements and have complied with all requirements of the new National Industrial Standard (NIS) logo.

He maintained that the people behind the defamation are just playing on the intelligence of Nigerians. “We have a web site (www.son.gov.ng) which contains all information on our standards and quality regulations. Every Nigerian who has doubts about any product certified by SON should crosscheck the facts”, he said.

Forensic and marketing analysts have also observed that it is very clear that the same source that initially created a video of a purported  ‘fake ’ or ‘original’ but who could not sustain the fabrication is the source responsible  for the current orchestration and poor dramatization of discovery of foreign content.

Analysts and observers agreed that this might be coming from the enemy’s camp as the recording left many gaps to cast a doubt on the genuineness of the video. For instance, the can was opened before the video recording, thus failing the basic test of validity.

They maintained that a careful look at the video reveals a lot of inconstancies and fallacies such as:

Ø All the persons in the video were faceless

Ø The ‘consumer’ did not tell us how he got to know that there was an object in the can.

Ø There was no mention of where it was bought or any intention to confront the retailer.

According to the analysts, the attempt remains a despicable and dirty way to ignite a brand war by exploiting the gullibility and stupidity of many social media users.

Marketing experts also maintained that the ‘sword’ may have emanated from interested industry persons who are afraid of the flight of Amstel Malta in Nigeria’s marketing space..

“The video is nothing but another dimension to our usual ‘PHD’ (pull him /her down) attempt characteristic of people on the floor. Let us spoil a good name if we can’t be as good. It is therefore surprising that anybody would want to attack the reputation of one of our premium products whose market leadership is undisputable in its segment”, a Lagos-based marketing analyst submitted last week.

Respite as Osun gets N80m feeding grant this week