The Seme Area Command of the Nigeria Customs Service in recent times has taken proactive measures to eliminate all barriers that serve as impediments to effective trade facilitation viz-a-viz the ECOWAS protocol along the Lagos-Abdijan corridor. 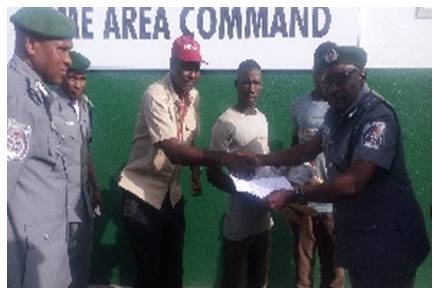 The new Customs Area Controller, Mohammed Aliyu, who promised to consolidate on the achievements of his predecessor, is seen to be matching words with action as he further collapses some operational structures along the busy land border.

The Controller who occasionally monitors the modus operandi of officers under his jurisdiction by way of uninformed visit, enjoined the field officers to ensure that total compliance to the service extant laws is the hall mark while engaging in anti-smuggling operations.

He disclosed further that in order to ensure the standardization of trade facilitation and protect the territorial integrity of the country, all incoming transport vehicles with particular emphasis to luxury buses must be subjected to scanning procedure as it is done with trucks and containers.

Commenting on the trapped vehicles that could not meet the dateline of the policy pronouncement of the Federal government , he charged the committee to ensure proper documents verification and authentication of duty payment of each vehicle trapped in the Customs vehicle seat before release. He warned that smugglers must not take advantage of the exercise as the numbers of the trapped vehicles in Customs custody is known to the Command.

Commenting further on the low revenue generated in the month of April, 2017 (N234, 266,289.58), the CAC attributed the unfortunate scene to the persistent low level of economic activities despite the relentless effort of the Command to create a conducive and an enabling trading environment for every legitimate trade.

In a related development, the Customs Area Controller handed over (2) two suspect (Mr. Sotoni Geopgesi and Mr. Achada Nonbe) with some illicit substances to the Commander Nigeria Drug Law Enforcement Agency (NDLEA) Badagry – Lagos who was represented by CSN Abioye A. Aremu on the 09th May, 2017.

The two suspects were arrested by officers and men of the Nigeria Customs Service Seme Command on information patrol along Lagos – Badagry express way on the 4th May, 2017. The accosted suspects were in possession of the following :-

Commenting on the handing over of the suspects and the substances, the Customs Area Controller disclosed that the Nigeria Customs Service being the lead agency will continue to exemplify and inculcate the spirit of synergy and inter-agency co-operation among relevant agencies at the land border.

He re-stated that NCS will continue to perform among others, the statutory role of securing the Nation’s busiest land border from trans border crimes that ranges from smuggling, Drug trafficking, human trafficking etc.

The Customs helmsman re-iterated the need for officers and men of the Command under his watch to ensure that in discharging their statutory functions, legitimate trade is facilitated to generate maximum revenue, while aggressive anti-smuggling operation is enhanced to enforce compliance level to government fiscal policies.

Nigerian officials speak as IMF forecasts 2.6 per cent growth in economy in 2017