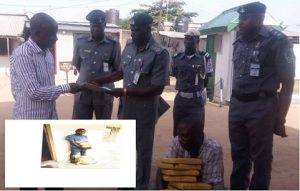 The Nigeria Customs Services Seme Command has handed over fourteen (14) wraps of suspected Indian hemp with one (1) suspect to the Commander National Drugs Law Enforcement Agency (NDLEA) represented by Abdul . A. Maiyaki on the 10th and 21st November, 2016 respectively. The suspect, Hassan Yusuf was intercepted by the patrol officers along  Ashipa – Gbethromey axis.

In the same vein, the Command also handed over a driver and four (4) children in his possession to the Comptroller Nigeria Immigration Service (NIS) Seme represented by Assistant Comptroller of Immigration (Surveillance Unit) Isa, I.A on the 18th November, 2016. The driver (Porsu David) suspected to be a human trafficker and the four children were intercepted at Ashipa axis by officers and men of the Command on 17th Nov, 2016 at 1200hrs in a vehicle with registration number AGL 538 BB.

Commenting on the handing over of the suspects to the relevant agencies saddled with the responsibilities of investigating the suspected trafficker and prosecution of the drugs suspect, the Ag Customs Area Controller, D/C Mulima, A. disclosed that the gesture is strictly in line with inter-agency cooperation that exist at the international land border.

He further stated that as the lead agency at the border, the Nigeria Customs Service will continue to collaborate with the relevant agencies for effective and efficient border management.

He added that as an agency that work strictly in line with the ethics of securing, coordinating and managing the border in line with the global best practices, the service also expect other relevant agencies to reciprocate the gesture by giving classified and credible information about smugglers and other unpatriotic elements involved in trans-border vices. 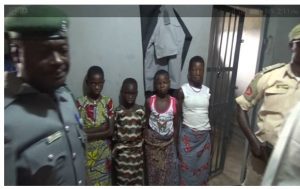 The Nigeria Customs Service will not compromise to act promptly against any offender at the border even when the offence committed does not fall directly under the purview of the service.