The Seme Command of the Nigeria Customs Service made an intelligent seizure of about Five hundred and fifty (550) cartons of poultry frozen products. The impounded poultry product with a duty paid value (DPV) of N6, 048,680.00 was arrested through credible intelligence sharing. 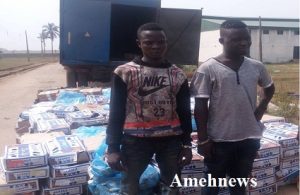 The Information patrol team led by CSC Ozah, Mathew. O. disclosed that the arrest was effected within Mosafejo axis when the said truck was coming out from the creeks on the 4th January, 2016 at 0500hrs.  The imported frozen poultry product was arrested in a blue Volvo truck with an orange head (Reg No. FKJ 359 XJ). The truck compartment used was well constructed for the purpose of concealment as it is physically seen empty on sighting the inside.  Two suspects arrested in connection with the seized truck containing the frozen poultry products are:-

Commenting on the seizure, the Customs Area Controller disclosed that, with reliable intelligence sharing, the eagle eye of the Patrol Officers are always beaming on every nooks and crannies of the border. He enjoined the patrol officers to keep on the good work as our resolve to enforce zero tolerance on smuggling cannot be compromised.

He said, the suspects will be prosecuted in the court of law to serve as deterrent to those who have chosen smuggling as the only way for their livelihood.

NIMASA Corporate Communications Leadership: Tumaka Out; Osamgbi  In as result of Redeployment