In an epoch event which heralds the beginning of continued collaborations and successful engagements, the Management of FMDQ Holdings PLC (“FMDQ Group” or “FMDQ”) hosted the Executive Members of the Ninth (9th) Nigerian Senate Committee on Capital Market (the “Senate Committee” or “Committee”) led by the Committee Chairman, His Excellency, Senator Ibikunle Amosun and accompanied by Ms. Mary Uduk, Ag. Director-General, Securities and Exchange Commission (SEC) and other SEC representatives on a courtesy visit on Thursday, March 19, 2020,to Exchange Place, Lagos. 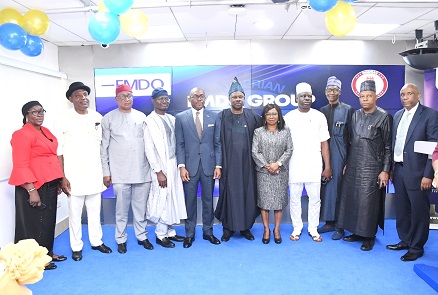 The Senate Committee on Capital Market is the legislative arm of the government responsible for providing supervision over the Nigerian capital market and proffering strategic direction, where required, for the associated regulators, operators and financial market infrastructures such as FMDQ.

Happening at an auspicious time, this very important visit provided a conducive avenue for the Senate Committee and FMDQ, Africa’s one-stop platform for the seamless execution, clearing and settlement of trades, to collaboratively discuss further areas of mutual interest as well as associated initiatives towards building a resilient capital market in Nigeria. This is well in line with FMDQ’s “GOLD” – Global Competitiveness, Operational Excellence, Liquidity and Diversity – Agenda for the empowerment and alignment of the Nigerian financial market with its international counterparts.

Welcoming the Senators to Exchange Place, Mr. Bola Onadele. Koko, Chief Executive Officer of FMDQ Group expressed his delight and applauded the Senate Committee for its efforts at bridging the gap between the legislators and the market; stressing the importance of stakeholder engagement such as this to the achievement of the desired economic progress in Nigeria. Koko, as he is fondly called by the market, also recognised the commitment of the Committee to foster a collaborative capital market in support of the realisation of the 10-Year Nigerian Capital Markets Master Plan and further, Nigeria’sEconomic Recovery and Growth Plan.

Also commenting on the engagement between the Senate Committee and FMDQ Group, the Senate Committee Chair, Senator Ibikunle Amosun, commended FMDQ on the “laudable initiatives being implemented to deepen the capital market”. He went on to offerthe “unequivocal support of the Committee to FMDQ Group to propel growth and improve investor confidence in the Nigerian financial market.”

Presenting initiatives to unlock Nigeria’s potential through the capital markets, Mrs. Adaze Uzor-Kalu, Head of External Relations at FMDQ Group,highlighted FMDQ’s role in championing the realisation of the Nigeria that we desire. She noted that, through the Group’s strategic initiatives focused on the growth of various sectors of the economy including Housing, Transport, Power, etc. that the Nigerian capital market is able to effectively support national development whilst boosting the economic impact of Small-and Medium- Scale Enterprisestowards promoting prosperity for all.

Presenting the FMDQ tombstone following the signing of the e-Visitor’s Register by the Senate Committee Chairman, Ms. Kaodi Ugoji, the Group Chief Operating Officer at FMDQ Group, thanked the Executive Delegation for its recognition of FMDQ’s achievements in the Nigerian financial market, and reiterated the Group’s unwavering commitment to work with the Legislators and other capital market stakeholders to make the Nigerian financial market credible and globally competitive.