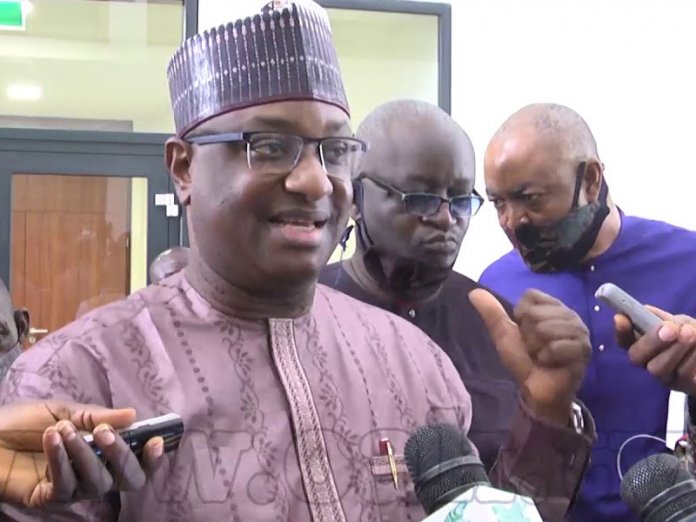 Following Tuesday’s face-off between a joint committee of the National Assembly and Minister of State for Labour and Employment, Mr. Festus Keyamo, angry federal legislators yesterday passed a resolution suspending the implementation of the recruitment of 774,000 public works personnel, being supervised by the minister.

The modalities for the recruitment of beneficiaries of the programme had caused a rift between the two parties at a public hearing in Abuja on Tuesday.

According to the National Assembly, the executive arm of government does not have an exclusive right over the recruitment programme for which N52 billion had been voted in the 2020 revised budget.

The lawmakers challenged President Muhammadu Buhari to go to court if he feels that the National Assembly is encroaching on his powers.

This was coming as President Buhari has warned political appointees and other government officials against using their positions to bestow undue advantage on anyone seeking government jobs and other favours.

Chairman of the Senate Committee on Media and Public Affairs, Senator Ajibola Basiru, who spoke to journalists on behalf of the two chambers of the National Assembly after an executive session of the Senate, also advised the presidency to approach the court if it feels its powers are being encroached upon by the legislature.

“If the president sees that his powers are being encroached upon, he can approach the court of law. What we are saying is this – this project the way you are looking at it, it is as if it is an exclusively presidential project,” he stated.

The senator, while responding to a question, said the conception of the programme was not exclusive to the presidency, explaining that its conception, approval and funding are with the considered input of the National Assembly because it believes it’s going to be beneficial for the purpose of addressing the challenges of COVID-19.
According to him, government revolves around the three arms – executive, legislative and judiciary.

He said: “On your perspective on encroaching on the powers of the president, there is no exclusivity in terms of any programme that is to be implemented, except the National Assembly is not part of government. Government, as defined by the 1999 Constitution, has three components: legislative powers as stipulated in Section 4; executive powers Section 5 and the judicial power in Section 6.

“It is the totality of these that constitute government. So, when you are saying the government is doing a programme, it is not President Muhammadu Buhari that is doing the programme; it is the government of the people. Implementation, appropriation and execution all rolled into one. There is no dichotomy such as encroaching on the powers of the president.

“Assuming the National Assembly is opposed to the programme, we could not have approved it. You cannot appropriate, but we want to be sure that names don’t just fly.

“The two chambers of the National Assembly asked the federal government to halt the programme until the implementation modalities are explained to the legislative arm.”

Basiru and his counterpart in the House of Representatives, Hon. Benjamin Kalu, in a joint statement, said the suspension of the scheme was necessitated because the lawmakers were concerned about the proper and effective implementation of the scheme.

They also mandated their Committees on Labour and Employment to immediately invite the Minister of Labour and Employment and any other officials of the ministry to appear before the joint committee to brief it on the modality for the implementation of the engagement of 774,000 persons for public works.

The lawmakers said they want to ensure transparency of the process just as it was done with the National Social Register by the Ministry of Humanitarian Affairs, Disaster Management and Social Development.

The two-page statement read in part: ”The National Assembly reminds members of the public that the legislature as part of the conception of the programme, approved it and appropriated funds for its implementation as part of the COVID-19 response strategy. In accordance with the constitutional imperative of oversight, the legislature being important stakeholders in the democratic process, and elected representatives of the people needed to be appraised of modalities for implementation for effective feedback to our constituents and in ensuring that our constituents optimally participate in and benefit from the process. In view of the foregoing, the implementation of the programme shall be on hold pending proper briefing of the National Assembly.”

Keyamo had engaged the federal lawmakers in a shouting match on Tuesday over the modalities for the implementation of the 774,000 public works recruitment which resulted in the minister being walked out over his refusal to apologise to the legislators for his comments.

However, the Speaker of the House of Representatives, Hon. Femi Gbajabiamila, yesterday said the leadership of the House had commenced moves to resolve the face-off between the National Assembly and Keyamo.

Gbajabiamila, when he appeared at the Public Accounts Committee’s public hearing in Abuja, said the seeming differences would be resolved amicably within the next 24 hours.