Seplat Petroleum Development Company Plc, leading Nigerian independent oil and gas company listed both on the Nigerian Stock Exchange and London Stock Exchange, emerged the overall winner of the 2019 Pearl Awards, clinching four awards, which is designed to celebrate excellence and its leadership in the Nigerian capital market. 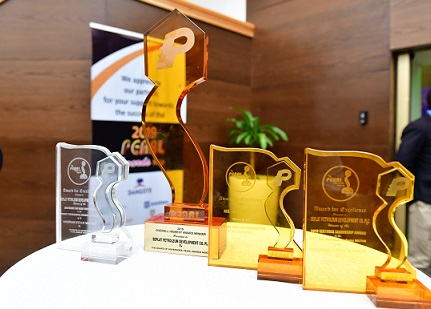 At the PEARL Awards which was attended by regulators, leaders and key stakeholders in the capital market, Seplat achieved the feat of emerging the “PEARL” back-to-back (2018 and 2019), which was a notable feat.

The award was presented to the Seplat’s management by the Chairman of the Board of the Securities and Exchange Commission, (SEC), Mr. Olufemi Lijadu, and Ms Mary Uduk, the Acting Director-General of SEC, supported by Dr Farouk Umar, Chairman of the PEARL Awards Board.

Apart from winning the overall PEARL Awards for 2019, SEPLAT also clinched three (3) other awards: Sectoral Awards for the Oil and Gas Segment, Highest Net Ratio Award; and its Chief Executive Officer, Mr. Austin avuru emerging as the CEO of the Year.

Dr. Umar, the Chairman of the Board of Pearl Awards, in his address, pointed out that the awards was an avenue for encouraging development of the capital market, and praised the Federal Government for supporting the market.

The President of Pearl Awards, Mr. Tayo Orekoya, speaking on the theme of the 2019 edition: “Celebrating Sustainable Leadership & Resilience” said the event was recognising leaders who represent beacons of hope for the capital market.

Orekoya said that on the threshold of a quarter of a century celebrations, PEARL awards has recognised and rewarded over 85 quoted Nigerian companies for outstanding operational and stock performance with eighteen (18) emerging as the overall highest awards winners of the stock market at different times.

He said: “The PEARL Awards remains the only awards in Nigeria that rewards outstanding performance of quoted companies in the Nigerian capital market based on verifiable facts and figures.

The Acting Director-General of the Securities and Exchange Commission, Ms Uduk commended the PEARL Awards team for its legacy of driving excellence and competitiveness in the capital market.

She assured stakeholders of the continued support of the Apex regulator for efforts towards rewarding hardwork, dedication, ingenuity and excellence in the capital market.

Mr. Lijadu, Chairman of the Board of SEC Nigeria, commended Seplat for its strict adherence to good corporate governance ethos, while thanking PEARL Award for evolving for over two decades and remaining consistent in its drive to support the growth of the capital market.

The management of Seplat thanked the organisers of PEARL Awards and NAPE for the recognition and expressed the company’s commitment to global best practices in the oil and gas sector.