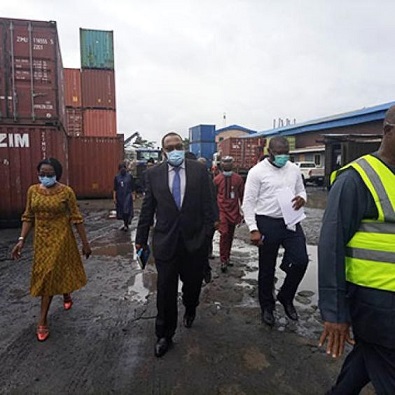 Mrs Celine Ifeora, NSC Deputy Director, Regulatory Services, disclosed this on Wednesday while visiting bonded terminal to ascertain the type of operations carried out in Lagos.

According to her, the council had received various complaints from people regarding services being rendered by the terminal.

”The viral video of someone complaining bitterly about charges is the climax,” the council’s deputy director said.

She said that due to these complaints, the Executive Secretary, Mr Hassan Bello, directed them to visit the terminal and hear their sides of the story since complaints were coming on daily basis.

Ifeora said that the complaints ranged from faulty equipment, charges on delayed services not rendered, lack of waiting room for agents to non-automation of services.

She noted that on issue of sealing the premises, if sealed, it would take time to be reopened.

“Are you people capable of handling this terminal and if you are not, let us seal this place and there will be no business so that people who have the requisite power can handle it.

“What we will do is that if we seal the place, we will ensure that NSC staff is left within the terminal to ensure that shippers who are ready to clear their goods will be given the opportunity to do so without any form of distraction.

“Meanwhile, we will also ensure that no cargo is gated in, so that you too will lose business and know how painful it is when agents and owners of cargoes suffer due to your delay.

“We have come to sound a note of warning. We are here with our seal, with the enforcement team and if we go round and not satisfied, we will still seal the terminal,” Ifeora said.

She pointed out that the NSC was a cargo interest organisation and anywhere it observed that cargo was being distorted, it would appear immediately because things must change in the country.

She urged the terminal operator to automate their processes because the country cannot be retarding when other nations ports were going forward.

”We are tired of stories; processes in the port needs to be automated,” the NSC deputy director said.

She expressed displeasure with the way some people were unstuffing cargoes along the road, urging those involved to desist forthwith, while calling on the terminal operators to report such issues when they arose.

“The NSC is strategising and coming up with ideas. There will be reversible charges by service providers that failed to provide services as and when due.

“We are very serious with regulations; we will not fold our hands and watch things as they rot; we are also working with banks to ensure there is prompt confirmation of payment for agents,” she said..

On cash, Ifeora said that all processes must be automated and excuse that the terminal were still accepting cash would not be accepted.

”We will write a special letter to the terminal and it will be strictly adhered to,” she said.

In her reaction, Mrs Maureen Balogun, Chief Accountant of the terminal, said that some might be an oversight or work in progress.

Balogun said that the terminal was ready and available to serve customers to the best of its capacity.

On the viral video, she said the terminal contacted the person that did the video and was told that they were not referring to the terminal charges but to customs charges.

She noted that the June 13, incident was as a result of battery problem of their equipment but was resolved immediately and they resumed work.

“We are still young, two years in business and whatever complaint, we assure you that we will ensure it does not repeat itself.

“This Saturday is additional day the companies set aside to help customers, previously we do not work on Saturday but it is due to the fault of the equipment that we decided to work and we loaded the normal containers that we were meant to load,” she said.

On charges, Balogun said that records of payment exist and recently, there was a bust on the tarmac and people were not able to do anything.

”On the report it stated spoilt tarmac and no charges were levied on that,” she said.

However, Mr Chris Akhimien, Tin-Can Coordinator, Association of Nigerian Licensed Customs Agents (ANLCA) disclosed that they had evidence to show that they were debited when the terminal equipment was faulty.

Akhimien said that another issue was the terminal’s time of operations, adding that they did not do transfer and someone with cash would be stranded with the money.

“We still have issues with the waiting room which is not ready. We are urging the Shippers’ Council to look into this,” he said.

COVID-19: Nigeria Economy and Manufacturing Sector, Journey So Far in 2020