Kindly Share This Story:
Nine hymntestants (contestants) with excellent performance were revealed during this week’s stanza of Hymnodia with six on probation waiting for possible hymnviction (eviction) as the first-ever superlative TV reality show on hymns and worship continues. 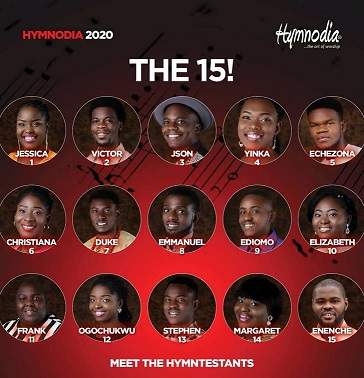 The hymntestants on probation with fates hanging in the balance, to stay in the Hymnstitute (show’s house) for the contest which resumed July 26, are Jessica Etta, Victor Ige, Ogochukwu Onwuelingo, Johnson Ikpeama, Emmanuel Onubogu and Enenche Okwori.
Other Hymntestants for Hymnodia Season 2 are Elizabeth Olaitan, Duke Asuquo, Margaret Thomas, Stephen Nwosu, Christiana Oluwatobi, Frank Okoye, Yinka Odunayo, Ediomo Akpan and Echezona Okekeifi.
Their chances of further participation in the Hymnodia show depends on numbers of votes from fans, friends and loved ones, a situation that will further increase their hope of contesting for the grand prize of the Asaph (a specially designed award named after David’s chief musician), a brand-new car and N5 million.
This was announced by the Dean of the Hymnstitute, Ben Ogbeiwi, on behalf of the Judges after the continuation of the highly rated TV reality show on Sunday, July 26.
The Judges applauded the brilliant performance of the hymntestants as they thrilled the audience with hymns in various tones, with each outwitting the other, in a show of talent.
To vote for the Hymntestants, fans, friends and loved ones are advised to log into the www.hymnodiahq.org and click on vote, click on the picture of the Hymntestant of choice, with the voting options, and follow the instructions on the screen.

Also, keep all relevant details handy, as the platform times out in 60 seconds if left untouched.
The Hymnodia Season 2 call for entries was made known to participants on January 1, 2020, while the Hymnstitute, housing the Hymntestants for the hymn contest opened on February 23.
It is an innovative triple-E (entertainment, education and edification) programme which has a selection of hymntestants competing to showcase their talents in diverse dimensions of hymn-related skills including hymn writing, hymn rendition or hymn making.
In his remark, the Initiator and Chief Executive Officer of Philosoville Limited, Kufre Ekanem, said “Hymnodia has turned out to be a toast of the viewing public, the great thing is that it is not a franchise.

It is a home-grown culture impacting creative expression thought out and created over a 10-year period. It is indigenous, world-class and complete.”
It is a one-hour programme on Lagos Television (Channel 256 on DSTV, Channel 90 on Gotv and Channel 113 on Startimes) with a magazine show on same channels on Wednesday evening.
It is also streamed live online via the LTV App available on the app store and on the dedicated YouTube channel, Hymnodiahq.
The show can also be viewed on GITV, Kaduna; Anambra Broadcasting Service, Onitsha; Ondo State Radio/TV, Akure; ITV, Abuja and Cross River TV, Calabar.
Others are: Akwa Ibom Broadcasting Corporation (AKBC); Kwara TV, Ilorin and Plateau Radio TV, Jos. All the stations show Hymnodia on the same days (Sunday and Wednesday) but at different times.