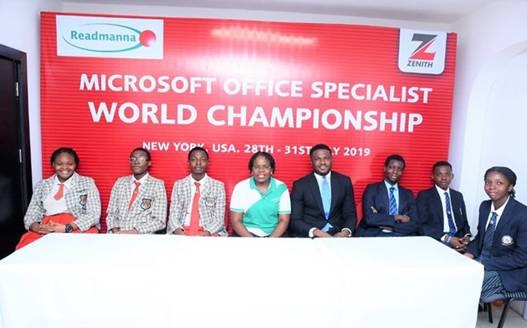 The winners will be representing Nigeria at the World Championship taking place in New York, USA from July 28 – 31, 2019.

The national winners are:

The students will be accompanied by the following two ICT teachers:

Zenith Bank Plc, one of the biggest banks in the country by tier-1 capital and the most profitable bank in the country, has partnered with ReadManna, organizers of the competition in Nigeria, since 2007 and sponsored Nigerian winners’ participation in the World championship.

The championship is organized annually in Nigeria by ReadManna Empowerment Initiative, a not for profit company led by Mrs Edna Augusto and focused on empowering students and youth in Nigeria with practical and relevant basic computer skills aligned to global standards. ReadManna is authorised by CertiportInc, a Pearson VUE company, the initiator of Certiport Microsoft Office Specialist World Championship for Students to conduct this international annual championship in Nigeria.

The MOS World Championship challenges students to demonstrate their proficiency in the use of Microsoft Word, PowerPoint and Excel – Versions 2013 and 2016, and is open to all students aged between 13 and 22 years that are enrolled in an academic institution.

This year’s competition, which was held over a period of seven months between 1 October, 2018 and 30 April, 2019  received about 1200 entries from 21 Secondary Schools in Lagos, Abia, Kaduna, Ogun, Rivers, Kwara States and the FCT.

Kindly Share This Story: The Nigeria Communications Commission says all challenges that hindered the deployment…