The Chief Executive Officers (CEOs) of MAN member-companies across the six geo-political zones of the country and the ten Sectoral Groups of the Association said that Aggregate MCCI which is also the aggregate Manufacturers CEO’s Confidence Index for the third quarter of 2019 has improved to 51.7 points showed a marginal increase of 0.8 index point over 50.9 index point recorded in the second quarter of the year. 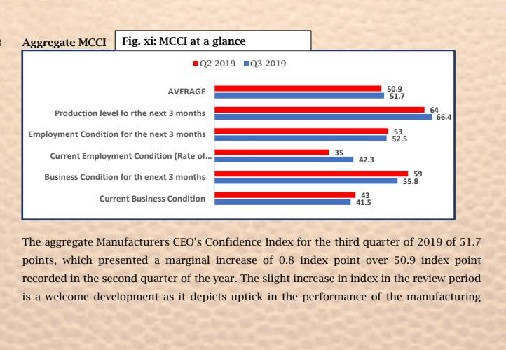 However, indexes of ‘Business Condition for the next ‘3 month’ dropped from 59 points recorded in the second quarter to 55.8 points in the third quarter of the year. ‘Employment Condition for the next ‘3’ months’ also weakened marginally from 53 points of the second quarter to 52.5 points recorded in the third quarter of the year. The meager improvement in Production expectation and the Current Employment Condition expressed the degree of hope and intensity of the level of confidence of CEOs of manufacturing concerns that going forward, Government would do the needful to make manufacturing operating environment friendlier before year end.

“Although, the Third Quarter index point indicates marginal improvement in the economy over the preceding quarter, it is far below projections and expectations of MAN and majority of the member-companies operating in the sector.

Flour Mills of Nigeria raise ₦29.89billion out of its ₦70.00 billion Bond Issuance Programme on FMDQ Exchange Platform in 2021