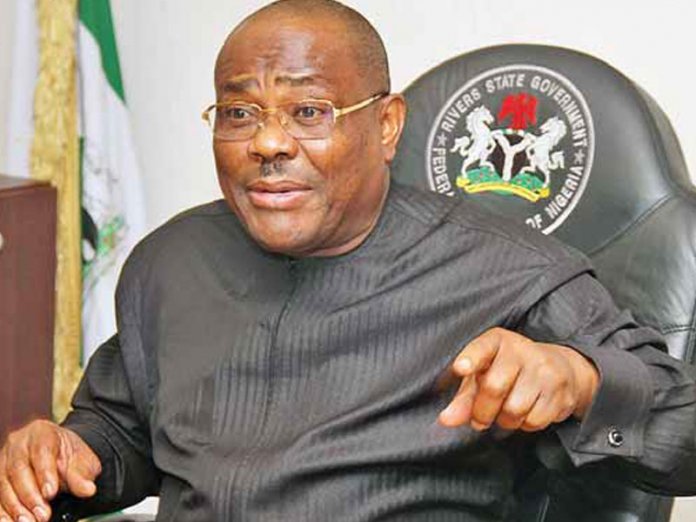 Rivers State Governor, Chief Nyesom Wike, has declared that the Soku oil wells belong to the government and people of Rivers State as affirmed by the Federal High Court and based on the admission by the National Boundary Commission (NBC).

He noted that the NBC had admitted that it erroneously shifted the boundary between Rivers and Bayelsa States from River Santa Barbara to River Saint Bartholomew in the 11th Edition of the Administrative Map of Nigeria.

Wike spoke yesterday in Port Harcourt while addressing journalists in a reaction to allegations by Bayelsa State Governor, Hon. Seriake Dickson, that the Rivers State governor was hyping the judgment over the disputed oil wells to cause division among the Ijaw nation.

Dickson had during a media chat at the Government House in Yenagoa, alleged that Wike was merely using the disputed oil wells between the two sister states to create disunity and to cover up the deliberate underdevelopment of Rivers Ijaw communities by pretending to be their champion.

Dickson also said as a Nigerian and a bona fide Ijaw son, he and indeed any past or future governor of the state reserved every right to travel anywhere without being questioned by anybody.

In his reaction, Wike described the allegations made against him by his Bayelsa counterpart as the baseless ranting of a frustrated politician who is yet to come to terms with his losses.

“In 2002, the NBC altered the boundary in the 11th Edition of the Administrative Map of Nigeria. They made a mistake by shifting the boundary from River Santa Barbara to River St. Bartholomew. At the Supreme Court, the NBC wrote a letter admitting their error.

“The Supreme Court made an order for the NBC to correct the error of the 11th Edition in the 12th Edition,” he said.

Wike said seven years after the Supreme Court gave the order, the NBC was yet to effect the correction. He said that preliminary report on the 12th Edition indicated that the NBC made no attempt to obey the order of the Supreme Court.

His words: “We had to sue the NBC to enforce the order of the Supreme Court, where they were directed to ensure that the boundary between Rivers and Bayelsa State is River Santa Barbara.

“Judgment has been given. The best the Bayelsa State governor can do is to go on appeal.
“You cannot heap your frustration on us. We have nobody to carry guns, so the best place to go is the court.”

“The outgoing Bayelsa State governor is the one trying to cause disharmony by attempting to collect what belongs to the Ijaw in Rivers State,” he said.

He stated that contrary to Dickson’s allegations, he had in four years executed more projects in Ijaw land than his Bayelsa counterpart had done in eight years.

The governor said: “I read Governor Dickson’s outburst on almost all national dailies today. I also watched it on television last night. As a governor, there are some levels you cannot descend to.

Wike said while Rivers State was a major construction site, the Bayelsa State governor had failed his people by failing to utilise their resources judiciously.
He said for a small state like Bayelsa, it was wrong for Dickson to expend N70 billion on an uncompleted airport, when Bayelsa State lacked good roads and basic infrastructure.

He regretted that the outgoing Bayelsa State governor refused to respect the rules of protocol, when he visited the Amanyanabo of Kalabari without informing the Rivers State government.

He said: “The person talking about invading Rivers State in January 2020 lacks respect for protocol. If he was well schooled, would he use that phrase that he wants to invade Rivers State?

“I never said that I will dethrone the Amanyanabo of Kalabari. I said that I will withdraw the recognition by the Rivers State government if he continues to disrespect the office of the governor and not play according to the rules.

He said he still enjoyed a good working relationship with the governors of Imo and Akwa Ibom States as the differences were basically on official matters.
He said that through the poor leadership of the Bayelsa State governor, the PDP Governors’ Forum and the PDP South-South Governors’ Forum failed.

Wike berated Dickson for claiming that he was interfering in Bayelsa State politics. He said before Dickson became governor, it was the present PDP National Chairman, Prince Uche Secondus, and King Turner that brought him (Dickson) to receive his (Wike’s) support.

He said the outgoing Bayelsa State governor was never committed to the PDP, all through the elections.

He said: “We are the only state in the South-South that President Muhammadu Buhari never got 25 per cent. Buhari got 45 per cent in Bayelsa State. So, who colluded with whom? It is now that Dickson has realised that they played him.

All those nocturnal promises were not kept. I challenge Dickson to ask his candidate, Senator Douye Diri the contributions I made. Is it because I didn’t pass it through him?

On why the PDP lost Bayelsa State, Wike said: “Dickson planned for PDP to fail elections and he is now crying federal might. He assumed the role of God. Nobody could tell him anything. During his second term election, people resisted the Army. But this time, they left him alone.

He added: “Dickson concluded plans to join the APC. Timipre Sylva and Heineken Lokpobiri blocked him. He knew I have strength, he would have consulted me.

“Dickson colluded with these people, so that EFCC will not arrest him when he leaves government. If you like, carry any level of propaganda; I will protect the interest of Rivers State.”

Wike insisted he was a good representative of Rivers State as he used their mandate effectively to develop the state. He said in four and half years, he had achieved more for Rivers State than Dickson did for Bayelsa State in about eight years.

He said: “I have represented Rivers people very well. I have made Rivers people proud. Rivers State is multi-ethnic and I have ensured all ethnic groups get the dividends of democracy.

“Part of the representation of Rivers State is to protect what belongs to Rivers State. Rivers people know that I have represented them very well.”

In a judgment in Suit Number FHC/ABJ/CS/984/19, the Attorney-General of Rivers State versus National Boundary Commission, Justice Inyang Ekwo of the Federal High Court declared that after examining all the documents from relevant government agencies and facts before the court, the Soku Oil Wells/fields belong to Rivers State.

CBN: N50 PoS Charge to be Paid by Businesses Not Customers