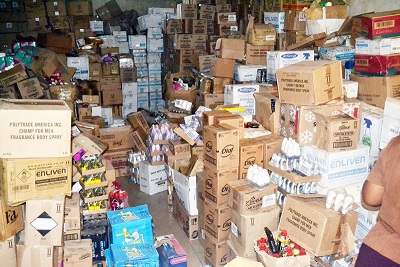 The Standards Organisation of Nigeria (SON) has arrested a dealer of  expired household products  stocked in two buildings in different locations at a surburb in Kirikiri, Lagos.
The Director General, SON, Osita Aboloma told journalists that the arrest came off a collaborative effort of the Nigeria police with SON.
Aboloma said products found in the premises included household consumables imported by Julf Ventures Limited, and it is coming two months after another twin three storey building belonging to the same company was discovered stocked with expired products, tampered labels with distorted expiry dates.
DG SON who was represented by Director. Compliance, SON, Engineer. Bede Obayi  said that much of the substandard products had already left the warehouse, but promised that his agency would trace them.
“We acted on the intelligence we received from well-meaning Nigerians. You can see the volume of expired products here and imagine the implication for our society in terms of health issues.
“Imagine somebody buying expired cream and applying on the body? The person is just applying a cream  that
the active ingredients had already expired. You know such can cause reactions on the skin
“We promised Nigerians that we would carry out investigation that the products that have left the warehouse to different shops all over the country must be properly traced and withdrawn from circulation.
” Today, we were able to discover two other warehouses belonging to the same company based on a tip off by the Nigeria Police Force (NPF) to clamp down on the importer”, he said.
Aboloma described as disheartening, a situation where an importer would just specialise in  importing almost expired goods  and selling same  to innocent Nigerians, pointing out that products of such nature rather than have economic value were harmful.
“What we are seeing here today are various products littering the whole warehouses with poor storage conditions and the products are all expired.
“ We also have here products with five years expiration dates and this tells you exactly what this man is doing and we cannot take it,” he said.
The DG commended the Lagos State government for its prompt response in sealing the  entire building to prevent the products from circulating, adding that SON would conduct due diligence on the ones recently discovered.
“This shows that this man is not interested on doing the right thing. For the man not to declare other warehouses before now, clearly shows it is an act of criminality.
“He is tampering with the expiry dates and selling expired products that to unsuspecting Nigerian consumers”, he said, adding that more worrisome was the fact that the products were very high security risk products.
“ We have arrested him and handed him over to the police for further investigation and prosecution in line with the SON act,” he added.
Advertisement

The Director, Investigation and Enforcement, National Agency for Food and Drug Administration and Control (NAFDAC), Kingsley Ejiofor, expressed worry that substandard products continue to find their way through porous borders, condemning this nefarious and illicit trade by unscrupulous Nigerians.
He however lauded the NPF and SON for clamping down on the importer while also calling for other hands to be on deck to checkmate influx of fake and substandard goods into the country.
Ejiofor enjoined Nigerians to be willing to volunteer information, observing that the warehouse management system of the company was obviously poor.
He wondered how a firm could store very sensitive products meant for human consumption in a such a bad condition.
“This is unacceptable and we are going to take joint action with SON and other regulatory agencies. We need information to help us serve Nigerians better”, he said..