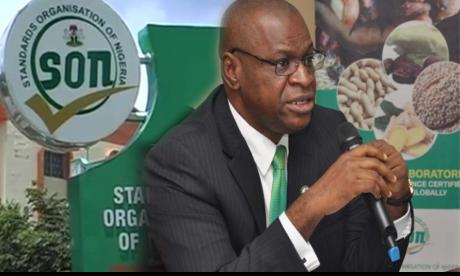 The Standards Organisation of Nigeria says it has seized substandard goods worth N22.7bn imported into the country and those produced within the country in the last one year.

The Director-General, SON, Mr Osita  Aboloma, disclosed this in Lagos on Thursday at a sensitisation/awareness forum,  organised by the organisation for maritime stakeholders with the theme: ‘Collaboration as a tool for zero substandard imports.’

Aboloma, who was represented by a director in his office,  Mohammed  Kabir, said that the substandard products included those that had been destroyed by the organisation and those still in its warehouses awaiting destruction.

He noted that the essence of the forum, which was the fourth this year,  was to interact with  maritime players, discuss import/export businesses, with the objective of getting them deeply committed to doing the right things, especially concerning import processes and procedures.

Though he lamented that the SON had not been allowed into all the seaports, Aboloma said the economy and the lives of Nigerians were endangered due to the influx of substandard goods into the country.

Aboloma said,  “The nation’s economy and the lives of Nigerians are endangered due to the influx of substandard goods. It is worthy to note that the value of substandard products that the SON has seized in the past one year is estimated to be over N22.7bn (both destroyed and awaiting destruction).

The Director,  Inspectorate and Compliance Directorate,  SON,  Obiora Manafa, said the infractions mostly recorded by SON from importers of substandard goods included concealment,  false declaration, and incomplete declaration among others.

While he warned dubious importers to desist from such acts,  he added that such importers would find it tough next year to carry out such illicit trade.

He revealed that apart from carrying out their duty at the seaports, the SON personnel would visit markets to carry out surveillance on products and through that exercise substandard products would be identified.

He said,  “Next year, we will be going to markets for surveillance. We will buy the products and then take them to our laboratories for examination. Any of the products that failed the test, we will go after the manufacturers or those importers who brought the goods into the country.”