The Standards Organisation of Nigeria (SON) today destroyed seizures of tyres, cooking gas cylinders worth N300 million in estimate at its warehouse in Amuwo Odofin Lagos. 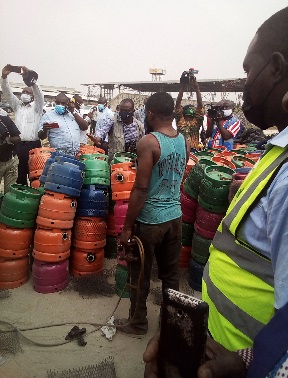 Farouk Salim, Director General of SON who oversees along with journalists, the representative of National Environmental Standards and Regulations Enforcement Agency (NESREA) and Nigerian Copyright Commission (NCC) the destruction of the substandard items has expressed readiness of the agency to ensure that Nigeria is not turned into a dumping ground of substandard goods.

Salim displayed how tyres were stuffed into one another in order to allow for large numbers inside a container there by made the said tyres failed test.

READ ALSO THIS: SON to ensure Nigeria not turned into dumping of substandard goods, destroyed containers of Tyres, Cylinders in Lagos

SON DG while expressed agency concern how some hoodlums were finding their way into the warehouse at midnight to steal the substandard items that have been confiscated and selling them to innocent Nigerians.

In response how many containers of the said tyres? He said there about seven containers of tyres were seized because their integrity has been compromised from different suspects and before being destroyed to the agency obtained court order.

Salim noted that the tyres with manufacturing number 3919 by Mirage are being destroyed today are contraband goods, some are new but are below standard when tested, this means they might likely explode if gas is put inside; they are life threatening to Nigerians 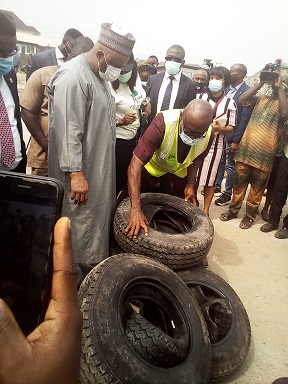 “I wish there was a way we can send it back where it came from, but we do not have any agreement foreign countries to return back whatever they are allowing people to dump here”

“Unfortunately, when you do that, the integrity of the tyres have been compromised and they might explode, tyres are not meant for other tyres to be stuff into them”

In his words: “Unfortunately, people are stealing them, we have security guards at this facility, but it is not enough to keep them away in the middle of the night to steam them”

SON DG disclosed that some of the items that here, we are still in court to get the judgement against them, but in the main time, people are crawling into the warehouse stealing the wires and selling them, so we are fighting a double edged war” he reiterated

He lamented the absence of SON at the port, saying that if the agency was inside Lagos ports which accounts to 85% of the imported goods into the country, substandard goods would be curtailed.

Speaking on SON’s readiness for AfCFTA, Salim reassured the stakeholders that the agency within its powers have increased surveillance, and is now working with importers association to fish out any perpetrators being from the African Continental Free Trade Agreement (AfCFTA) or outside Africa.

“We are prepared for AfCFTA, we have our standards which are international standard and we don’t do things independent of standard obligations, so we are prepared standard wise to watch out for products brought into the country from fellow African countries”