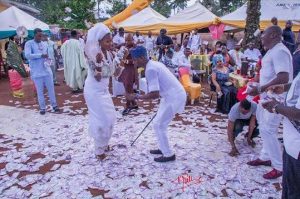 There is an increase in the rate of abuse of the currency which contravenes Section 20 and 21 of the CBN act as a result of that the Central Bank of Nigeria  and The Nigeria Police Force  have to embark on a nationwide arrest of whoever defaces the Naira at there various gathering of interest.

According to Section 20 and 21 of the CBN Act, whoever sells, buys, sprays and squeeze the naira will be imprisoned for six months or given an option of N50,000 fine or both.

CP Muhammad Mustafa,the Commissioner of Police in FCT disclosed in Abuja , during a joint briefing with CBN Senior Directors.

Mustafa revealed that the police have arrested two staff of the apex bank and two others who were caught in the act of defacing the Naira giving their names as: Iliyasu Musa, Awua Felix, Mercy Otuma and Abdulwahab Kusa.

“The CBN Enforcement Committee on the abuse of the Naira in collaboration with the FCT Police Command carried out raid at Dei-Dei, Jabi and other locations within the FCT which were used for illegal trading and hawking of Nigerian currency, an act contrary to Section 20 and 21 of the CBN Act, 2007,” he said.

“The offence of selling, buying, spraying and squeezing of the Naira attracts six months imprisonment or an option of N50,000 fine or both as the penalty upon conviction.

“The suspects and exhibits have been transferred to the Command Criminal Investigation and Intelligence Department for further investigation adding that the case will be charged to court on completion of the investigation.

Also speaking, the CBN acting Director on Corporate Communication, Isaac Okorafor disclosed that the CBN has set up a mechanism to ensure that any staff of the CBN connected with the offence be punished adding that wedding halls would be raided.

“This is just the very first one this year, the efforts are going to continue just to let Nigerians know that it is an offence and abuse of our national sovereignty to squeeze, hawk, spray, dance or write on the Naira,” he said.

“It is an offence and we are pleading to Nigerians that they should try to respect the naira because it costs a lot of money to print and it is also an insult on our nation.

“The operation would also go to wedding halls and do not be surprised when couples will be arraigned because if you want to give money, give them instead of dancing on our national currency, they do not do that elsewhere.

“We will also extend it to other banks in the country because this is a battle we must win.”