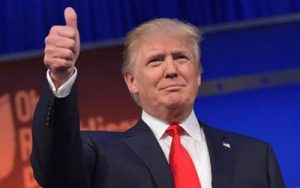 Undersecretary of State Tom Shannon on Friday signed a presidential permit for the controversial project ahead of a Monday deadline for evaluating it. Secretary of State Rex Tillerson, the former CEO of Exxon Mobil, had recused himself from the process. The president is expected to make an announcement on the decision later Friday morning.

The developer, TransCanada, confirmed the news in a move that would undo one of former President Barack Obama’s defining environmental decisions.

Trump has been a vocal cheerleader of the 1,700-mile pipeline to bring Canadian tar sands oil through Montana and South Dakota to Nebraska, where it would link up with existing pipelines. Like other advocates for the project, the president has said it will create construction jobs and strengthen the country’s energy security.

As an extra lift to American workers, Trump had previously promised the Keystone would be constructed with domestic steel. The administration earlier this month abandoned that pledge and granted TransCanada an exemption to use foreign steel during construction.

Winning the support today of the Trump administration, though crucial, is not the final barrier TransCanada officials need to clear. The Nebraska Public Service Commission must also sign off on the plans for building there. Their review is expected to take months.

Part of the fight there may hinge on the use of eminent domain. Some landowners are resisting orders to sell their property to TransCanada. The company has said it has agreements for more than 90 percent of the route on the U.S. side, according to The Washington Post.

Environmentalists opposing the project argue it will contribute too much to climate change, because extracting oil from tar sands is a particularly intensive process. The Sierra Club’s Lena Moffit, director of the organization’s Beyond Dirty Fuels campaign, threatened to file lawsuits against the federal government, saying they’d possibly argue the Trump administration rushed through necessary environmental checks.

Soon after taking office, Trump signed an executive action that gave the State Department 60 days to issue an opinion on Keystone. That deadline is set to expire Monday.

Obama rejected the pipeline in 2015, after years of debate. He did so saying it was not in the national interest and that approving it would undercut the country’s leading role combating climate change.