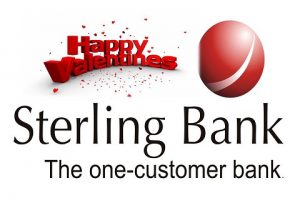 As part of its enriching lives proposition and in the spirit of Valentine, Sterling Bank has launched a campaign tagged #THINGSWEDOFORLOVE. The campaign which is online and offline would cut across its internal and external stakeholders.

The Bank has also announced the introduction of other programmes and events to delight its customers and staff to deepen the celebration of the lovers day. The Valentine’s Day is celebrated worldwide on the 14th of February every year.

The Bank in a statement signed by its Chief Marketing Officer (CMO), Henry Bassey explained that the programme lined up for the Valentine’s week includes visits by the Executive Management and Business Managers of the Bank to branches where they will take up specific roles serving customers. In Lagos, Abuja, Ibadan and Port Harcourt, the Bank will also be randomly distributing free BRT tickets and cinema tickets to members of the public under the umbrella of its Sterling Cares project.

The CMO also added that nationwide, staff will on Valentine’s Day wear a touch of red as they serve customers and give them goodies in the spirit of the season.

Explaining how the online engagement would work, Mr. Bassey said: “Our followers on Social Media will be requested to send in stories that show ‘things they have done for love with the hashtag #Thingswedoforlove. Submissions can be text, imaging (memes) and video content and sent to the Bank’s Instagram, Twitter and Facebook handles.

“The most creative entries will win prizes of a loaded Sterling Gift card loaded with N20,000. The winners will be gifted on the 13th of Valentine to enable them spend the cards on Valentine if they so wish”.

He explained that the  offline engagement will see the Sterling Bank Care team at select BRT bus parks in Lagos and similar parks in Ibadan, Abuja and Port Harcourt to give out BRT tickets and balloons to commuters and movie lovers during the Valentine Week while they share their #thingswedoforlove story on camera.

“The exercise will be done in two phases, with the first phase scheduled for the 10th and 11th of February while the second phase has been scheduled to hold a day after valentine which is the 15th of February 2017’, Bassey added.

He assured that the Bank would continue to leverage on special days in the year to celebrate Nigerians across all works as part of the Bank’s corporate social responsibility initiatives.