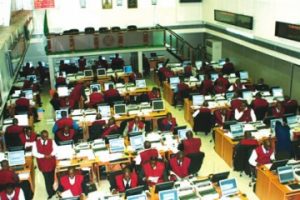 The Trading Floor of The Nigerian Stock Exchange

The trading activities on the floor of Nigerian Stock Exchange yesterday when Global Money Week event was going on market shedded N49 billion on the market cap. Market Capitalisation -cap- is the window through which every Stock Exchange around the globe measures their trading activities of listed equities. The market cap declined by 0.56 per cent to closed at N8.742 trillion from N8.791 trillion traded of the previous day which accounts for 0.049trillion.

The weekly trading activities chart from Monday through to Friday disclosed a total turnover of 3.195 billion shares worth N104.217 billion in 14,674 deals were traded this week by investors on the floor of the Exchange in contrast to a total of 1.309 billion shares valued at N10.323 billion that exchanged hands last week in 13,042 deals.

All other Indices finished higher during the week with the exception of the NSE Banking and NSE Insurance Indices that depreciated by 1.00% and 0.75% respectively

while Stock Market prices are plumbing in their millions, money market on other hand is wobbling and fumbling with declined in both price and reserve. Despite over subscribed of Nigeria Euro bonds and other foreign promo by top government functionery, our markets which is internally spirit are speaking with agried voice.

Tinubu floor Fashola for Ambode over inherited Debt In Lagos