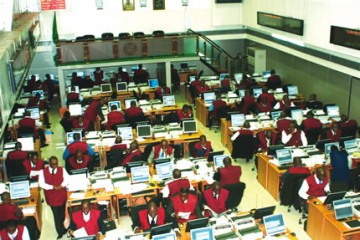 k market investors gained a total of N334bn last week as the market closed on a positive note for five straight sessions.

The market capitalisation of equities listed on the Nigerian Stock Exchange increased from N11.424tn on February 2 to close at N11.758tn on February 8.

The stock market plunged to its lowest level in more than one and a half years on January 9 as the market capitalisation fell below the N11tn mark from N11.72tn on December 31, 2018.

Analysts attributed the gains in the market to the resurgence of foreign portfolio investors.

Vetiva Capital Management Limited, in its weekly market report, said the Nigerian capital market saw an increase in foreign participation since the turn of the year, beating analyst expectations of a stand-offish investor sentiment pre-election.

It said the clearest indication of the gains was the resurgence of foreign inflows into the Nigerian market, indicated by a jump in FPI contribution to the importers and exporters foreign exchange window (51 per cent versus 22 per cent in the fourth quarter of last year).

The analysts at Vetiva said the positivity could be attributed to both foreign and domestic factors, the change in tone from the United States’ Fed, indicating a slowdown in monetary policy normalisation and a relatively peaceful pre-election period.

They said, “The equity market has benefitted from the uptrend, with total turnover since the start of the year hitting N78bn, driven by renewed interest in large-cap stocks.

“That said, with the uncertainty of elections still looming large, market performance has remained tepid, with the All Share Index returning only +0.01 per cent year-to-date.”

The Nigerian equity market traded largely mixed at the start of the year amid bargain hunting and modest negative sentiment, spurred by sustained political uncertainty.

According to the analysts, despite the mild resurgence in investor appetite for Nigerian equities at the end of December 2018, tepid sentiment filtered into the market at the start of January with the ASI losing 6.7 per cent in the first few sessions of the year.

They said, “Nonetheless, investors taking position across key sectors, particularly the industrial goods sector (up 5.8 per cent month-on-month), translated into gains for select value counters and supported a flat return for the ASI.

“However, due to sizable sell-offs, a few sessions towards the end of the month, the broad index however lost 2.8 per cent month-on-month.”