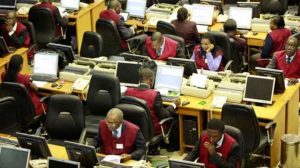 The nation’s stock market on Tuesday sustained the gains it began the month with as the market capitalisation increased further to N13.421tn from N13.410tn.

Consequently, the year-to-date loss settled at -12.2 per cent.

The insurance index led gainers, up by 1.8 per cent due to price appreciation in Continental Reinsurance Plc and Mutual Benefits Assurance Plc.

On the flip side, the consumer goods and banking indices declined by 0.4 per cent and 0.3 per cent, respectively, due to sell-offs in Nestlé Nigeria Plc, Flour Mills of Nigeria Plc, Union Bank Nigeria Plc and GTB.

Price depreciation in Oando Plc dragged the oil and gas index down by 0.2 per cent.

Investor sentiment, as measured by market breadth (advance/decline ratio), weakened to 0.7x from the 1.3x recorded in Monday’s trading session as 13 stocks advanced against 18 that declined.

Tripple G and Company Plc, Sterling Bank Plc, UACN Property, Lasaco Assurance Plc and Union Bank led the losers’ table as their share prices nosedived by 9.52 per cent, eight per cent, 6.82 per cent, 6.67 per cent and 5.71 per cent, respectively.

Analysts at Afrinvest Securities Limited said they maintained a bearish outlook on the equities market in the next trading sessions as investor sentiment remained weak.