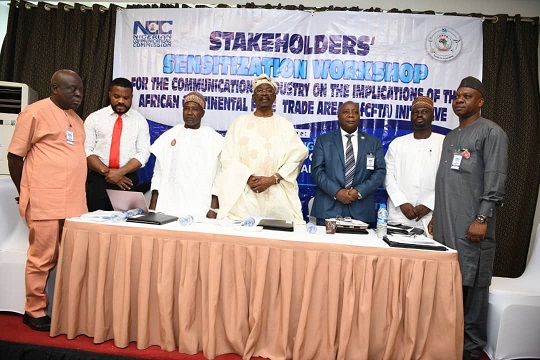 Speaking during the stakeholder sensitisation workshop on the implications of the African Continental Free Trade Area (AFCFTA) initiative for the Communications Industry held in Lagos, the Acting Director General of the Nigerian Office For Trade Negotiations (NOTN); Mr. Liman Liman said the Assembly of Heads of States of the African Union resolved that the liberalisation of trade in services in the AfCFTA shall be negotiated in two phases. Phase one shall involve liberalisation of what is referred to as priority sectors, telecommunications being one of them, he noted.

The two-day workshop with the theme: ‘Improving Nigerian Communications Industry Competitiveness for the African Continental Free Trade Area (AfCFTA) Initiative is being organized by the Nigerian Communications Commission (NCC), in collaboration with the Nigerian Office for Trade Negotiation (NOTN), which is a key element of the Governments’ institutional framework for driving Nigeria’s trade policy initiatives

The acting director general NOTN disclosed that the negotiations on the liberalisation of telecommunications have not yet begun. It is however expected that the framework of the telecommunications sector in the AfCFTA will include: regulatory disciplines, data transmission, cellular telephone, fixed telephone, mobile satellite, value added data services and other services to be determined by the negotiating parties, he added.

Mr Liman said the AfCFTA does not intended to harmonise telecommunications regulation, nor is the intention to usurp the function of the national regulator, rather, it is to ensure that amongst others, there is a minimum standard of treatment or regulatory principles which includes:

“Under the AfCFTA telecommunications regime, the following measures shall be prohibited:

However, he pointed out that although the process of granting a licence to operate shall be determined at national level, the AfCFTA telecommunications regime will set minimum standards or criteria for granting of licences, this is important for the purpose of ensuring predictability and certainty of the market. Such criteria may include:

“By 2025 mobile broadband will account for 87% of mobile connections, in Africa. The current figure for these services is 38%.

“Africa remains the region with the least developed telecommunications infrastructure in the world today, but with the fastest growing penetration of mobile telephony in the world, according to the Global System for Mobile Communications (GSMA).

“E-commerce and digital trade are on the rise in Africa; e-commerce sales in the Sub-Saharan region reached $16.5 billion in 2017 and are expected to reach $29 billion by 2022. This trend is primarily driven by increasing purchasing power of the middle class, increasing internet and smartphone adoption, and the growth of digital payment solutions, he added.